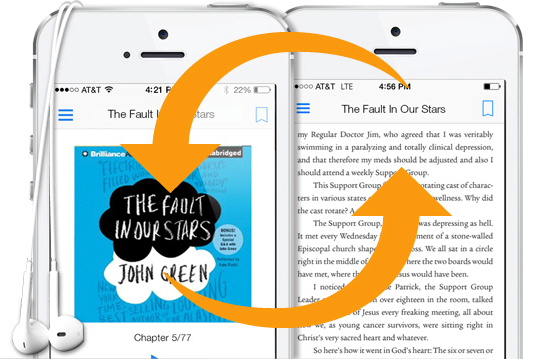 Sometimes you want to read, and sometimes you want to listen – and you might get through more books if you can switch easily between the two options. Amazon recognizes this, and has used its Audible acquisition to make it easy to switch seamlessly between reading an e-book and listening to an audiobook in its Kindle apps for iOS and Android.

The Kindle apps now let you switch to the Audible version with a single tap, provided you’ve paid for the audio upgrade of the book you’re reading. The audio upgrades start at $0.99 per title, but range up to around $3.99 or more for top-selling titles like “The Hunger Games.” Remember that you’ve already purchased the Kindle versions of these books, too, so it’s very possible that you’ll essentially be paying double for the same content, though in most cases the Audible upgrade is quite a bit cheaper.

It’s a smart way to drive additional revenue from existing purchases for Amazon, but it’s also genuinely useful for people who have a mixed commute or a busy schedule and would like to continue “reading” even when they’re unable to do so – like when they go from a subway ride to a drive for the final leg of their trip home, for instance.

The update should be rolling out to the iOS App Store and Google Play today, so check your updates if you want to start listening to those books.