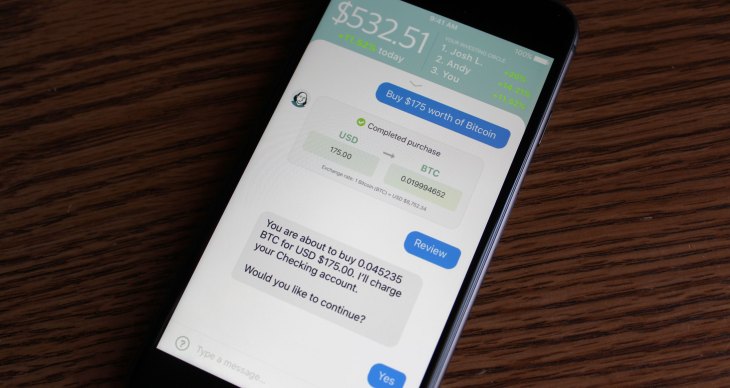 It’s generally a given that whenever a new technology takes off people rush into the space to build everything under the sun, and eventually natural selection kicks in and only the truly useful remain. For example, chatbots became trendy last year and we quickly began seeing chatbots for weather, movie recommendations, personal finance, etc. Some of these are useful, but until natural language processing improves you’re probably better just doing the task yourself.

But there are a few exceptions, with one in particular being chatbots designed for the purpose of making a very complex topic or task approachable to the average person.

Ben is a chatbot that lets anyone become familiar with cryptocurrencies via a recognizable chat interface. By talking with “Ben”, users can do things like take lessons and learn about cryptocurrency, read the latest industry news, and of course buy and sell Bitcoin.

By focusing on an underserved market (i.e people who have no idea what Bitcoin is or how to buy it) Ben has the unique advantage of not having to go head to head with established crypto titans like Coinbase or Circle.

After completing a KYC check (which is also done via chat) users in 21 states can buy and sell Bitcoin, with other states and support for Ethereum, Ripple, and Bitcoin Cash rolling out in the coming months. The startup charges 1% for buys and sells, which is in line or lower than most major exchanges.

The app also has a social feature where you can link with friends to see their returns (only on a percentage basis) to see who is a better investor.

User’s cryptocurrency is stored in the cloud but their private keys live only on their own personal device, which isn’t as secure as complete cold storage but does ensure that your bitcoin can’t be spent without someone having access to your phone. Ben also gives new users a backup seed to write down in case they lose their phone.

But Ben isn’t necessarily meant to support an experienced crypto user who has a high-value portfolio and needs advanced features and security.

Instead, the startup’s goal is to make buying and learning about cryptocurrency accessible to anyone, especially those without the technical knowledge or desire to spend the time learning how an exchange world. And as natural language technology evolves Ben will be able to answer more and more questions over time, making it a perfect on-ramp for people who need a little more hand holding before they open their wallet and trade their (actual) benjamins for a string of ones and zeros.