There are dozens of hackathons in Silicon Valley every month, but on Monday Facebook hosted one with a twist. Rather than the college-aged brogrammers that usually dominate the coding marathons, female veterans were the only participants at the first Women Vets in Tech event.

About 30 female veterans participated in the hackathon, pitching a variety of ideas from Bohdi therapies, an app to provide therapy to vets suffering from anxiety, to Puppyness, a crowd-sourced app that would tell dog owners which restaurants and stores in their area are dog friendly.”

This is the fourth Vets in Tech hackathon since it hosted its first in November 2012 at Adobe. The organization focuses on teaching veterans entrepreneurship skills and connecting them with tech companies as they return from active duty and search for employment. The Facebook hackathon was the first that was only for female engineers.

Starting the day at 7 a.m., the women veterans worked with Facebook engineers on developing business models and pitches for a panel presentation later that night with judges from Facebook, Y Combinator, Next World Capital and GE Ventures Healthcare. 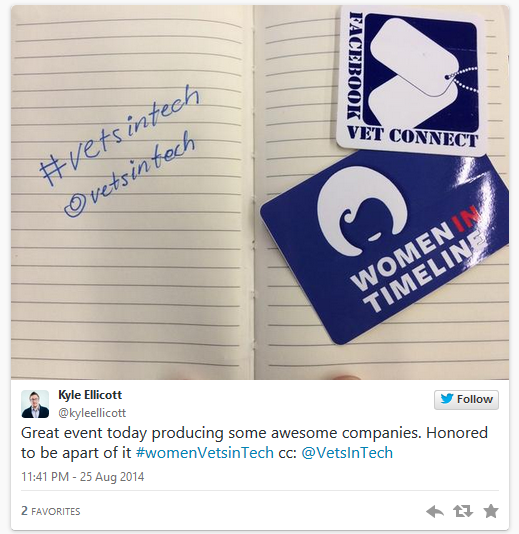 Kristi Erickson, a clinical psychologist who has worked with veterans and who is a military veteran herself, took home first place in the competition with her proposal for a company that would create an app and a virtual reality simulator using technology such as Oculus to provide veterans with anxiety treatment.

As the winner of the competition, Erickson is now raising funds on Indiegogo. She also receives office space and lunch with Craig Hanson at Next World Capital.

In a phone interview with TechCrunch on Tuesday, Erickson said she realized the need for a service like Bohdi while talking with veterans who were frequently not completing their treatments for anxiety and post-traumatic stress disorder because the exposure treatments they were receiving were too painful and difficult. But knowing that 91 percent of patients who complete treatment have improved quality of life, Erickson wanted to find a way to help other veterans complete their treatment.

In her work, Erickson implements dialectical behavior therapy (DBT), which she says focuses on helping patients cope in real world situations. She said this therapy could be enhanced by creating an app patients could access on the go. In an example, she said a patient beginning to experience anxiety symptoms while walking through a crowded Walmart could pull out the app, which would then provide the patient with situational coping techniques. Patients could also practice these techniques stimulation exercises using virtual reality technology.

Erickson said she has been thinking about creating a company like Bohdi for almost a decade, but technology has just caught up with her vision.

Her project was enhanced at the hackathon when she was able to work with a veteran who had experience working with Air Force flight simulators and another veteran who worked with a nonprofit for homeless veterans.

“There’s just a great need right now for military service members to gain treatment,” she said. “We all know about the problems right now with the VA and access to care. If we can come up with these new ways to use technology we can reach more of the people who actually need the help.”

Facebook first became involved with the Vets in Tech initiative last year, when its own internal group of veteran employees connected with the group and started a veterans hackathon at the company’s headquarters last year. This year Vets in Tech came back to Facebook, asking them to host a hackathon specifically focused on female entrepreneurship.

Amanda Talbot, a Facebook Diversity Recruiting Strategist and veteran, said the number of veterans working at Facebook is increasing, although Facebook does not publicly disclose how many employees self-report as veterans.

Another Facebook employee and veteran, Anthony Pompliano, was one of dozens of Facebook employees who came to offer technical advice to the female veterans. Pompliano, who had two startups after serving in the military, said it was important to give military veterans the confidence that they have the skill sets one needs to succeed in the tech sector.

“We hope people can leverage those skill sets rather than feel they’re at a disadvantage,” he said.

The dozens of veterans in attendance on Monday ranged in their technical abilities. Some just had experience in social media, while others were full stack developers. Vets in Tech founder Katherine Webster said it was important for Facebook to host an event like this because frequently companies underestimate the technical skills military veterans have. She said more resources should be devoted to accelerated programs that teach veterans these skills because they made sacrifices for their country rather than taking the traditional path and immediately spending four years in college.

“I’m so impressed with the quality of these women,” Webster said. “They’re just as smart as people at any hackathon, and on top of all that they fought for our country.”