Today, there are a variety of apps to choose from if you just want to privately chat with friends or even place phone calls without having to give out your real phone number – for example, Google Voice, Burner, kik, Viber, Whatsapp and others are popular choices. But these apps aren’t fully private. Users still have to provide a phone number or email when creating an account, or, in some cases, those you chat with can still find you at any time via your permanent user name.

That is, the connections you make on Buzz will automatically expire after 72 hours, unless both parties choose to continue chatting.

It’s a concept that makes sense for those who are just meeting for the first time – like someone you meet while at a bar, perhaps, or those you want to chat with when online dating.

Often, dating site users will ask for your digits in order to continue your conversations outside the dating platform itself. But not everyone is ready to hand over their real phone number, which is why apps like Burner or kik have come in handy.

But virtual phone numbers from Burner are not free, and they expire after a limited time unless you buy more credits or choose to subscribe to Burner’s auto-renewing service. In addition, if you use the same phone number while chatting with multiple new friends you met via online dating, you can’t “burn” the number (i.e., destroy it) to end contact with that one connection who isn’t panning out, but then continue to use that number to talk with others.

Meanwhile, though the majority of chat applications offer a way to communicate without having to give someone your actual phone number, you’re still discoverable by way of your username. That means that if someone wanted to stalk you, they could create new accounts to find you again on the service because they know your identity.

Buzz, however, is far more private. Users only have to add a photo, name and gender when signing up. Then, you’re provided with a temporary, unique identifier known as your Buzz Code. This is how others add you in the app.

Plus, unlike competing messaging apps, your Buzz Code is not permanent and you can change it whenever you choose. The company says that it may soon offer disposable “vanity” codes as an in-app purchase, so you can be added by a name, nickname, or other handle of your own creation instead. These, too, you can change at any time for privacy reasons. 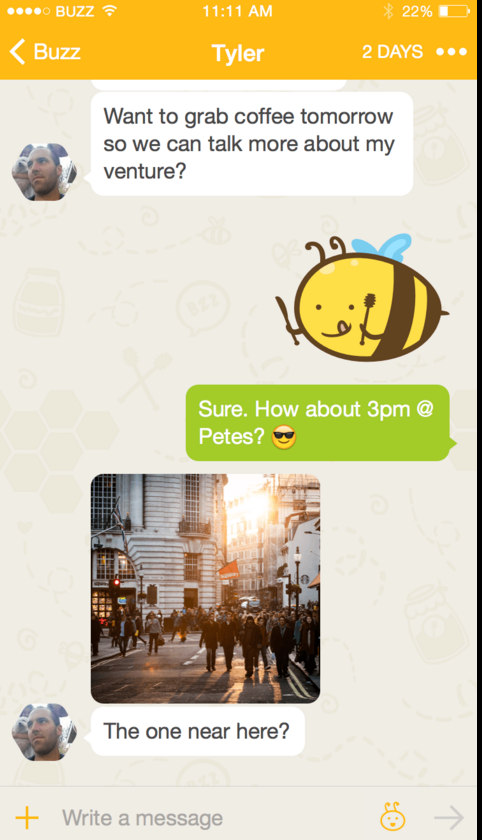 The idea for the app comes from co-founders Matthew Groves, Brian Albright and Hanna Xu – all three having previously met while they worked at the messaging app Tango. Groves and Albright were QA engineers, and Xu was a designer.

The team first thought up Buzz after hanging out in a bar, and watching the interaction between a guy and girl who had been flirting. “[Matt and Brian] were joking around, saying ‘she’s probably giving him a fake number,'” explains Xu. “But working on a chat app, we see that a lot – people don’t want to give out their contact info to strangers…so why not make an app that keeps your contact information private and is a really easy way to end conversations?,” the founders realized.

Groves and Albright left Tango in January to develop Buzz and Xu later joined them, though the Sunnyvale-based startup itself was not officially founded until July. Thanks to their mobile messaging backgrounds, the team decided to build their own infrastructure, rather than relying on third-party APIs like Layer, Twilio or Sinch, the latter whose API they tested during the TechCrunch Disrupt San Francisco 2014 hackathon.

Though the team ran a small beta with a hundred users before its launch, the real market test is happening now that the app is available to the public. The hope is that users’ increased interest in maintaining their privacy, combined with the challenges faced when using alternative messaging apps, will allow Buzz to establish its own niche in the crowded messaging landscape.

Buzz is a free download on iOS and Android.