How encryption keys could be stolen by your lunch 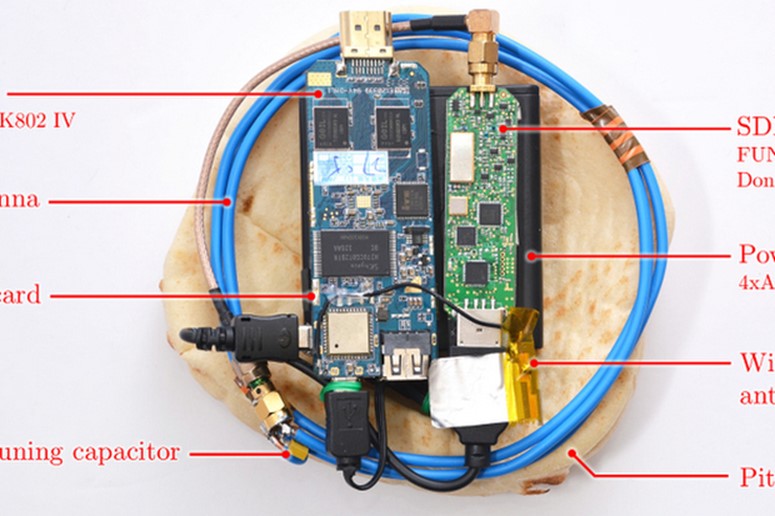 The new study builds on research into what can be learned from the electronic signals that waft from computers while performing computations, often referred to as side-channel attacks.

By studying the electronic signals, researchers have shown it is possible to deduce keystrokes, figure out what application a person is using or discover the secret encryption keys used to encrypt files or emails.

The researchers built a device that could be concealed in pita bread that collects electromagnetic signals from 50 centimeters away.

They dubbed the device PITA, which stands for Portable Instrument for Trace Acquisition. It consists of a copper unshielded loop antenna with a capacitor designed to pick up frequencies around the 1.7MHz range at which encryption key information leaks.

With the signals collected on an internal microSD card, offline analysis can then be used to deduce the keys in just a few seconds.

As part of the attack, the PITA device sends a few carefully crafted ciphertexts, or encrypted content, to a computer. When the content is decrypted by a computer, it gives off observable electromagnetic signals.

“The secret key can be deduced from these fluctuations, through signal processing and cryptanalysis,” they wrote.

The researchers also built a second device to collect the signals. Since the 1.7MHz frequency is in the same range as AM radio, they used a commercial-grade radio receiver called the Road Master.

“We then recorded the signal by connecting it to the microphone input of an HTC EVO 4G smartphone,” they wrote.

It’s hard to defend against these kinds of side-channel attacks aside from making sure any suspicious aluminum foil packages containing pita bread are checked for electronic devices.

However, electromagnetic signals can be blocked using Faraday cages, which are enclosures that use metal to dissipate electronic signals. Few people, however, work in windowless metal boxes. PC manufacturers are also unlikely to address the problem in their hardware since it’s just too expensive.

Re-engineering the software is a better approach. Algorithms and software could be changed to ensure the leaked signals are not distributing useful information. Work is already under way to make such changes, the researchers wrote.

“In fact, side-channel resistance of software implementations is nowadays a major concern,” the paper said.

The paper was co-authored by Lev Pachmanov, Itamar Pipman and Era Tromer, all of Tel Aviv University; and Daniel Genkin who is associated with both the university and Technion. It will be presented at the Workshop on Cryptographic Hardware and Embedded Systems in Saint-Malo, France, in September