The company has had a half dozen fires in facilities over the past 17 years.

According to an Associated Press report, investigators are looking into why a fire-prevention system failed to suppress the fire. The Buenos Aires facility was equipped with fire-detection and sprinkler systems, according to a statement by Iron Mountain.

The facility only held paper records, unlike many other of the company’s archives, which stores digital records in data centers, according to Iron Mountain spokesman Christian Potts. “We don’t yet know the cause of the fire in Argentina,” Potts said.

The fire yesterday is not a first for the company, which operates archives in 30 countries for storing digital and paper documents, film and other artifacts for both businesses and governments.

Over the past couple of decades, Iron Mountain archive facilities have experienced several fires that destroyed or damaged facilities.

In 1997, Iron Mountain’s document warehouse in New Jersey was damaged by fire. In 2006, the company’s London warehouse was totally destroyed by fire. According to an Iron Mountain spokesman, the cause of the fire was never discovered. However the London Fire Brigade blamed arson. 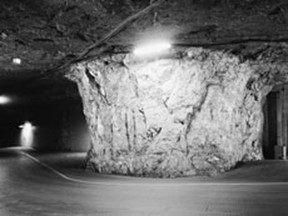 Click to view a slide show of Iron Mountain’s underground facility in a limestone mine in Pennsylvania.

Iron Mountain’s facilities are equipped with extensive fire warning and suppression systems. Its largest archive facility in Butler County, Pa. even has its own fire department, complete with full-sized fire trucks. That facility is located 22 stories underground in an abandoned limestone mine.

“This is a tragic event, and we are deeply saddened by the deaths of the brave first responders who rushed to save our facility,” Iron Mountain said in a statement. “Our thoughts are also with those who have been hospitalized, and we wish them a quick and complete recovery.”

Iron Mountain said all of its employees “are safe and accounted for.”

The company is working with local police and fire investigators to determine the cause of the massive blaze. The building had both fire-detection equipment as well as a sprinkler system.

“We recognize our customers will have concerns and questions, and we are in the process of contacting those who have been affected,” the company said.