Wi-Fi plus an app that enables live streaming of the hunt.

This is for those who may like Tec stuff and weaopns.

A high-tech Texas gun designer has started shipping its first generation shooting system that combines a hunting rifle with a Linux-based scope that takes so much guesswork out of hitting targets a quarter mile away that even novices can do it. 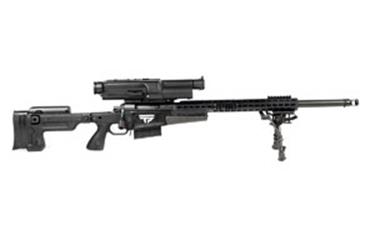 TrackingPoint Xact System consist of the rifle and electronic scope that accounts for distance, temperature and movement before freeing up the trigger to shoot, the company says. (Watch a demo of the product.)

It was originally designed with the goal of hitting a volleyball at 450 yards but has surpassed that, and the company says that someone with no shooting experience can achieve long-range marksman performance with the weapon the same day.

The scope has a laser range finder to calculate distance and temperature and pressure sensors to calculate relative humidity, which can affect the behavior of a bullet. It also includes objective lenses capable of magnifying a heads-up display image of the target 30x or 35x depending on model.

It also has gyroscopes and an accelerometer to determine how the weapon is positioned and moving in space.

Input from the scope is run through the system’s tracking engine that decides when the gun is properly aimed to hit the target. The engine runs on Linux kernel 2.6.37 based on the OpenEmbedded project.

The scope uses a barrel-referencing system that accounts for any changes in angle between the scope and rifle that may occur during shipping or due to the barrel heating up during use. The system automatically makes adjustments so the tracking engine remains accurate.

The scope also has a shot counter and calculates how the muzzle velocity of bullets the gun fires will change over time and works in that change as it analyzes each shot.

The only judgment the shooter has to make is estimating the wind speed and direction, and entering that information into the scope.
Shooters sight the target via a heads-up display, place the crosshairs on the target and hit a “tag” button on the trigger guard that imposes a red dot on the target. The dot – updated 50 times per second – remains on the target even if it moves or the scope is moved side to side or up and down.

Shooters squeeze and hold the trigger to arm the system and align the crosshairs with the red dot. The tracking engine allows the gun to fire only when the dot and crosshairs align.

Inside the scope the hardware consists of four major, three minor processors, says Oren Schauble, who is in charge of TrackingPoint, marketing.  Here’s how he describes the processors and their functions in an email:

“Main processors include the Predictive Image Processing Pipeline (PIPE) in [a field programmable gate array], the Tracking DSP for foreground target tracking and ballistics computation, the Imaging Processor for active imaging control and the User Interface Processor which runs the Linux operating system and is responsible for the HUD graphics, WiFi and off scope video processing. There are also 3 smaller processors used for image compression and power management.”

The Xact System also includes a Wi-Fi server that communicates with iOS or Linux devices equipped with TrackingPoint apps. As part of an introductory offer, the system comes with an iPad Mini.

The apps can receive the 640x480p H.264 video at 30 frames per second streaming live video that depicts what is displayed on the heads-up display on the shooting system. With it an instructor up to 50 feet way can see exactly what the student sees. The apps can also capture the video and upload it to sites such as Facebook or YouTube, and can pull down updates to the system software.

The apps also enable configuring the Xact System by entering, for example, the ammunition being used, and setting policies for how long before and after a shot video is recorded. The apps are free and available at the Apple Store and Google Play store.