ACM Sir Stuart Peach is right – but only to a point 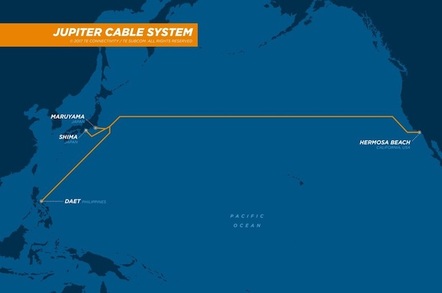 The JUPITER sub-Pacific communications cable. The Chief of the Defense Staff warns that cables such as these are vulnerable to attacks

The head of the British Armed Forces, Air Chief Marshal Sir Stuart Peach, has warned that Russia could cut off the UK by severing undersea communications cables.

In a speech made to military think-tank the Royal United Services Institute last night, the air marshal said: “There’s a new risk to our way of life, which is the vulnerability of cables which criss cross the sea beds. Can you imagine a scenario where those cables are cut or disrupted? Which would immediately and potentially catastrophically affect our economy and other ways of living if they were disrupted.”

Peach was giving the annual Chief of the Defense Staff Lecture, in which he talks about topical defense, security and geopolitical issues. He specifically highlighted Russia as the most likely nation state that might go around cutting cables and causing chaos.

“In response to the threat posed by the modernization of the Russian navy, both nuclear and conventional submarines and ships, we, along with our Atlantic allies, have prioritized missions and tasks to protect the sea lines of communication,” he said, specifically mentioning the role of NATO.

The air marshal also joked about bringing back the Railway Squadron of the Royal Logistics Corps, which drove military-manned trains to and from West Berlin during the Cold War, as well as beefing up Britain’s military hackers with a “reservist and contractor”-led cyber force.

A stagnant defense budget, allied to possible inflation-driven cuts to internal spending, mean the Royal Navy is facing decades of severe overstretch. Peach’s speech ought to be read (or watched, if you’ve an hour of free time – the Russian comments are all in the first five minutes) with the military need to put pressure on politicians for extra funding in mind.

Peach’s warning comes in the context of Russian naval renewal over the last few years and increasing naval activity by Moscow’s armed forces, as well as a recent report highlighting potential legal vulnerabilities around cables and their landing stations. The basic argument goes that as everyone knows where they are, they are uniquely vulnerable.

Without doubt, this is true. It is also true that in our increasingly interconnected world, even “the baddies” like Russia and Iran are also coming to depend on communications over these cables. In spite of conspiracy theories around Russian spy ships interfering with undersea cables, the greater threat to global connectivity appears to be the West, which has inserted eavesdropping capabilities into a large number of cables around the world. Both the US and UK have the advanced technologies necessary to do this sort of work while underwater.

Russia, meanwhile, seems to like trolling professional Western observers by sailing along cable routes, raising watchers’ blood pressure all the while. Rather than some kind of high-tech interference, the main fear is that the Russians will simply drop anchor over a cable site and drag it through in order to sever the cable – as happened accidentally off the coast of Jersey last year thanks to the careless crew of an Italian-flagged gas tanker.

As we previously reported, naval gazers reckon the Russian spy ships may be looking for so-called dark cables used for dedicated defense and intelligence communications. The idea is that by cutting dedicated links, spies and other snoopers’ comms are forced onto public cables – where they can then be re-routed into areas where hostile states can collect and analyze them at leisure.