For Model S drivers, Tesla Motors‘ oft-delayed Supercharger announcement was worth the wait. The electric vehicle company today explained how it will expand its network of high-speed electric vehicle charging stations across North America (and hinted that the technology will come to Europe and other areas in the future). 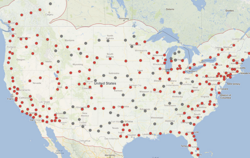 The Supercharger roll out will take place as follows. The number of Supercharger stations will triple from eight today to 25 by the end of June, bringing coverage to more of California, the Pacific northwest, in Texas between Austin and Dallas, and in Illinois and Colorado, as well as the east coast. By the end of the year, Superchargers “will connect most of the major metro areas in the US and Canada,” Tesla says, and by a year from now, the network will cover “almost the entire population of the US and Canada.” You can see the 2015 map above (click to enlarge) and there’s an interactive map over on Tesla’s website that shows the predicted coverage area through the years. CEO Elon Musk said on a conference call today that he thinks there will be more in the ground by 2015 than the map shows today.

“Tesla needed to solve the problem of long-distance travel and we can’t wait for others to agree with our strategy.” – Elon Musk

The first Tesla model, the Roadster, and other electric vehicles are not compatible with the Superchargers, so for right now, only Model S drivers will be able to use all these new stations. All future Tesla vehicles will be able to take advantage of the technology, though, and Musk said he’s not against working with other automakers to make their EVs compatible. The batteries need to be built with Supercharging in mind, he said, and Tesla needed to “solve the problem of long-distance travel and we can’t wait for others to agree with our strategy. If we wait for some sort of consensus, it’s going to take too long. We just need to get going and other manufacturers can either copy us or join us.”

Musk also said there is grid storage – using huge, half-megawatthour batteries – at some of the stations that have solar power, where stationary batteries take energy from the sun and store it until a Model S pulls up. That means these stations can be completely taken off the grid, so that “even if there is a zombie apocalypse,” Musk said, “you will still be able to travel throughout the country using Superchargers.” Good to know.

We heard before that Tesla might announce something about a battery swap. When asked about that today, Musk coyly said he’s a big fan of options and that, “maybe we’ll have something to say about that in the future.”

On top of the increased number of stations, Tesla is also upgrading the Supercharger technology to be faster. Instead of charging at 90 kW, the new rate is 120 kW, which means you can add three hours of driving to a pack in “just over 20 minutes.” Tesla previously announced that Supercharging is and will remain free, for life, which makes going on a road trip awfully affordable once you’ve paid your $80,000 for a Model S. Musk said he’s going to do just that, retracing a college road trip from LA to NYC, with all of his kids (he has five) later this year.

Tesla opened its first Superchargers last October. At the time, the company said each station cost around $250,000 to install. Today, Musk said the stations cost $150,000 without solar and $300,000 if they have solar panels.

Electric vehicle buyers enjoy green energy. Turns out, folks are more likely to buy a plug-in vehicle if they know the electricity that will power the car, or at least some of it, will come from a renewable energy source.

That’s the conclusion of a study produced by Environmental Research Letters (ERL), which found that plug-in vehicle demand in regions with a “green electricity” option is a stunning 23 percent higher than in areas without a clean-energy option. Researchers from Canada’s Simon Fraser University and UC Davis polled prospective electric-vehicle and plug-in-hybrid buyers and found that buyer interest jumped where there was a chance to double-down on their green cred if they could use something like, say, solar power. For those with a little time on their hands, here’s the report.

Automakers like Tesla Motors, with its solar-powered Superchargers, and BMW have already shown they understand the connection between green energy and selling EVs. The Germany-based company is getting ready to start selling its first mass-produced plug-in vehicles under its new i sub-brand – the i3 is due towards the end of the year – and last year struck a deal with Real Goods Solar to offer special deals to ActiveE drivers who wanted to charge green.