Meanwhile, in meatspace, cameras are everywhere. An EFF report on the thousands of automated license place cameras out in the wild, “mounted on street poles to capture the plates of passing cars as part of ongoing law enforcement dragnet surveillance programs,” revealed that “more than a hundred ALPR cameras were exposed online, often with totally open Web pages accessible by anyone with a browser.” Another informs us that “mobile biometric technologies are now being deployed more widely and cheaply than ever before—and with less oversight”?

As a result, in the not-too-distant future, it seems likely that the only real privacy you will have will be online. Maybe, if you’re lucky, inside the walls of your own home. (And perhaps places where you pay for privacy “by the second,” to quote William Gibson’s Neuromancer.) It won’t be long at all before everything you do out in the world can and probably will be mapped, tracked, data-mined, and analyzed. That’s why online privacy is so important, and why threats to it matter.

And that’s why Tor, aka “The Onion Router,” is so important. Tor routes your web traffic through layers of computers that don’t track your data, so that nobody can tell which sites you’re using, and the sites you’re using can’t tell where you are.

It’s been around for many years now, but I’m pleased to report that it’s still taking major strides forward. Last year Facebook made itself more available via Tor. Then Facebook allied with Tor to, as of last week, reserve the .onion top-level-domain for Tor, which will make secure Tor connections vastly easier to set up. And just last month Tor launched a beta messenger app.

(This, and Tor’s history of US government sponsorship, has led to series of really embarrassing conspiracy theories from the likes of PandoDaily. This is why non-technical journalists should not write about technical subjects. If you’re going to suggest that open-source software has dark ulterior vulnerabilities, you need to point at exactly where they are in the code (or deployment process), or you will quite rightly be laughed out of the room. Funding and relationships are not unimportant — and I’m sure Pando will now write me off as part of the shadowy conspiracy, as Tor developer Jacob Appelbaum is an old friend — but it’s the running code that actually matters. Sadly, non-engineers don’t seem to understand this, or how laughably ridiculous they look as a result.)

And while we’re on the subject, I’m even more pleased to report that Tor is by no means the only small collective of skilled developers / hackers / activists working to improve your online security. I give you, at long last, Open Whisper Systems‘ brand new Signal release for Android, rolling secure messaging and secure phone calls into a single app named Signal: 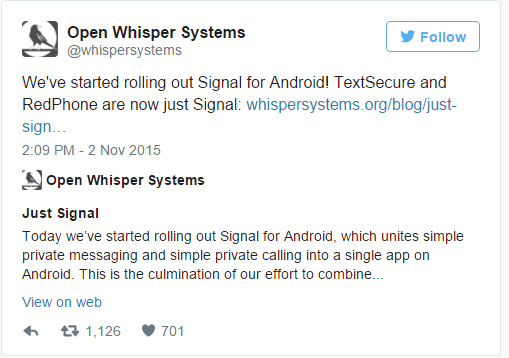 …and it’s endorsed by a celebrity, too! But this is one endorsement I’m pretty sure you can’t buy:

In this era of new Star Wars trailers, it’s hard for a novelist like me not to frame the ongoing online privacy battle as one fought between authoritarians using their overwhelming superiority in power, money, and numbers to build the tools for surveillance states (hardware, software, legalware) versus, in the other corner, a rebel alliance of plucky privacy activists (Snowden, the EFF, Appelbaum, Moxie Marlinspike) trying to fight back with the Force math and software.

…And, er, federal funding. Hey, the world is a complicated and nuanced place. Go make it a little simpler, and slightly less widely surveilled; go support and use Tor and Signal. For yourself, and also to help, in a small way, the people who really need it.