Touchjet WAVE transforms the TV into a giant tablet 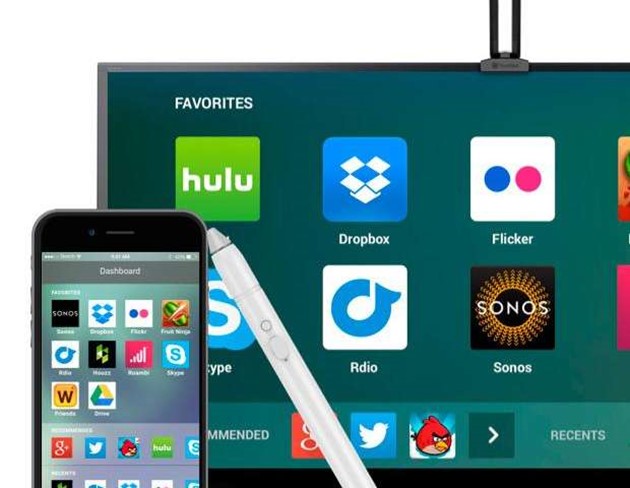 Touchjet WAVE is heating up on Indiegogo, and is being promoted as a device that turns a TV into a touchscreen smart TV. It’s an Android device that attaches to the top of any flat screen TV to make it touch-enabled.

The result is that one could have a TV turned into a giant touchscreen tablet, along with a finger stylus and remote app control. The stylus is an attractive companion, especially if you do not want to worry about fingerprints all over your screen.

Numerous actions for leisure and work are all possible via this device: Stream movies. Listen to music. Search for things. Play favorite games (only much bigger). Last but not least, make hassle-free presentations with full interactivity.

A promotional video shows a work team meeting; one participant swipes for a file from her tablet straight over to the TV screen; the presenter shows it to the rest of the team.

According to the company, it runs any Android app on its embedded Android 4.4 OS. You can control WAVE from across the room using the app. How the app works: From the home screen, you tap on Apps. Tap on the Play Store icon. Logon to your gmail account or create a new one. When logged in, you can download apps that you purchased previously on other devices or you can download new apps.

For users to make this all work, they would need a TV or display with HDMI input (display is 20″ to 80″).

How does the device actually work? Finger and stylus touch is made possible via two embedded infrared sensors. The company refers to its “bleeding edge” infrared technology. That is how it tracks finger movements and taps across the screen.

The data is sent to the WAVE’s light processing unit—translating the infrared inputs into gestures and taps that the Android system can understand.

The setup would involve clipping the device to the TV, plugging into any HDMI port, then tapping on some dots to calibrate the TV. The team even further simplified the setup explanation in two steps with three icons: snap-in; plug-in; done (checkmark). It connects to wifi for streaming, downloading and browsing.

What’s in the box: WAVE, the TV mount, the stylus, the HDMI cable and power cable.

Also at the time of this writing, they offered a $99 “earlybird” price for a Touchjet WAVE with estimated delivery in March. The full range of prices and perks can be viewed on the campaign page.

Touchjet has offices in San Francisco and Singapore. Since its founding, the idea behind the team has been to make a mark on the way people interact with each other, and they have been keen to come up with technology that can bring touch on to big screens in homes, schools and the workplace.

Gabe Carey in Digital Trends reported on the thinking that went behind the new product. They had enough hints around them. Whether via cinema character icons or realtime broadcast studio design , they could see themselves engineering something like this sooner than later.

Touchjet’s Helen Thomas, CEO, said, “We watch CNN news rooms and film characters like Iron Man swipe and use touch [to] control big screens,” she says. “We want WAVE to bring the experience and interaction to our daily life.”