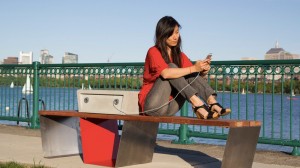 Continuing the trend toward nearly everything becoming smartphone-friendly — from ovens to boxing gloves — benches in the Boston area are getting a technology boost, too.

Some park dwellers in the region are already charging their mobile devices via solar-powered benches, which could eventually collect real-time data about its surrounding environment too (think air quality and noise levels).

Smart urban furniture company Soofa (developed by Changing Environments, an MIT Media Lab spin-off) is bringing more of its solar-powered benches to Boston and Cambridge, Mass. parks soon. The name Soofa stems from an acronym the company developed to describe a smart urban furniture appliance: SUFA. To give it more of a Silicon Valley feel, Richter switched the letter u to double o’s.

The company aims to make the bench a kind urban watercooler for people to meet and refuel their devices before continuing with their day.

“There isn’t too much knowledge or perception around renewable energy these days because people are removed from it — it’s either on the roof or set aside somewhere that you don’t see it,” co-founder Sandra Richter told Mashable. “We wanted to change the way people see its immediate benefits by putting something out into public spaces.” 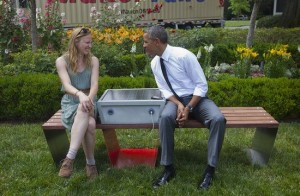 President Obama is one of the first people to try out the smart bench. Also pictured: Soofa co-founder Sandra Richter.

Six benches are already installed at various locations in Boston, with four more scheduled to roll out in the coming weeks. The company has about 100 solar-power equipped benches ready to go, with plans to produce more to keep up with demand.

“It’s hard to get investors to back something that is a new market, but we’re already gotten so many requests from corporate campuses, education organizations, retailers and cities, from Tel Aviv to places in Italy, Germany and Hong Kong, so now we’re focused on how to scale quickly,” said Richter.

City benches vary in price — in some cases, parks have spent $10,000 on cast iron benches, while others are significantly cheaper. Addressing the cost issue, Richter said, “The smart benches will be on the pricier side because of the electronics, but we want it also to be affordable enough to encourage adoption.”

The project became a full business earlier this year, and later partnered with Verizon and Cisco to help get it off the ground, but urban charging isn’t entirely new. For example, Street Charge has charging stations in places like Central Park and throughout Amsterdam, offering city goers a place to juice up their smartphones while on the go. But, as Richter puts it, “why stand when you can sit?”

“It’s great that there is an effort from young designers to bring tech and design into the urban environment,” she added. “We’re looking at developing other urban fixtures that could be used in a smart city environment, too.”