A cybersecurity researcher today uncovers a set of 7 new unpatchable hardware vulnerabilities that affect all desktops and laptops sold in the past 9 years with Thunderbolt, or Thunderbolt-compatible USB-C ports.

Collectively dubbed ‘ThunderSpy,’ the vulnerabilities can be exploited in 9 realistic evil-maid attack scenarios, primarily to steal data or read/write all of the system memory of a locked or sleeping computer—even when drives are protected with full disk encryption.

In a nutshell, if you think someone with a few minutes of physical access to your computer—regardless of the location—can cause any form of significant harm to you, you’re at risk for an evil maid attack.

According to Björn Ruytenberg of the Eindhoven University of Technology, the ThunderSpy attack “may require opening a target laptop’s case with a screwdriver, [but] it leaves no trace of intrusion and can be pulled off in just a few minutes.”

In other words, the flaw is not linked to the network activity or any related component, and thus can’t be exploited remotely.

“Thunderspy works even if you follow best security practices by locking or suspending your computer when leaving briefly, and if your system administrator has set up the device with Secure Boot, strong BIOS and operating system account passwords, and enabled full disk encryption,” the researcher said.

Besides any computer running Windows or Linux operating systems, Thunderbolt-powered Apple MacBooks, except retina versions, sold since 2011 are also vulnerable to Thunderspy attack, but partially.

For those unaware, Direct memory access (DMA) attacks against the Thunderbolt port is not new and has previously been demonstrated with ThunderClap attacks.

In brief, DMA attacks are possible because Thunderbolt port works at a very low-level and with high privileged access to the computer, allowing connected peripherals to bypass operating system security policies and directly read/write system memory, which may contain sensitive information including your passwords, banking logins, private files, and browser activity. 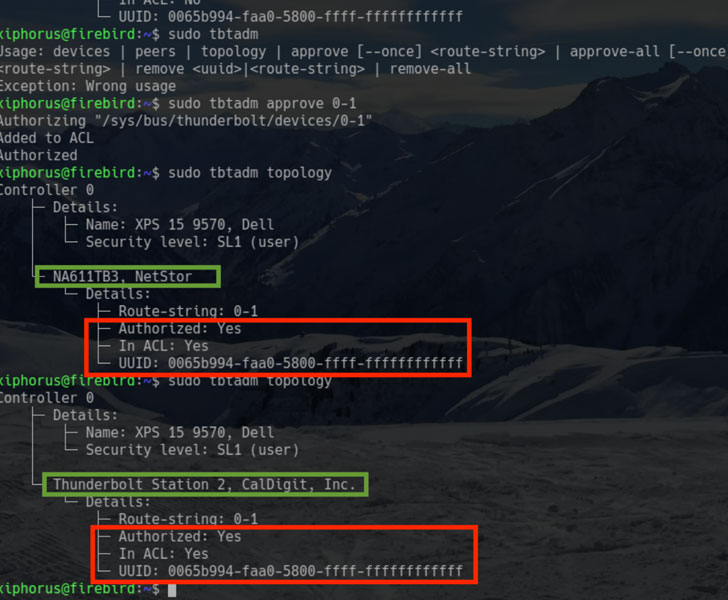 To prevent DMA attacks, Intel introduced some countermeasures, and one of them was ‘security levels’ that prevents unauthorized Thunderbolt PCIe-based devices from connecting without user authorization.

“To further strengthen device authentication, the system is said to provide ‘cryptographic authentication of connections’ to prevent devices from spoofing user-authorized devices,” the researcher said.

However, by combining the first three Thunderspy flaws, an attacker can break the ‘security levels’ feature, and load an unauthorized malicious Thunderbolt device by forging Thunderbolt device identities, as shown in a video demonstration shared by Ruytenberg.

“Thunderbolt controllers store device metadata in a firmware section referred to as Device ROM (DROM). We have found that the DROM is not cryptographically verified. Following from the first issue, this vulnerability enables constructing forged Thunderbolt device identities,” he added.

“In addition, when combined with the second issue, forged identities may partially or fully comprise arbitrary data.”

“In addition, we show unauthenticated overriding of Security Level configurations, including the ability to disable Thunderbolt security entirely, and restoring Thunderbolt connectivity if the system is restricted to exclusively passing through USB and/or DisplayPort,” he added.

“We conclude this report by demonstrating the ability to permanently disable Thunderbolt security and block all future firmware updates.”

According to Ruytenberg, some latest systems available in market since 2019 include Kernel DMA protection that partially mitigates Thunderspy vulnerabilities.

To know if your system is affected by Thunderspy vulnerabilities, Ruytenberg has also released a free and open-source tool, called Spycheck.

Interestingly, when the researcher reported Thunderspy vulnerabilities to Intel, the chip company revealed it had already been aware of some of them—with no plans to patch or disclose it to the public.

Ruytenberg claims to have found more potential vulnerabilities in Thunderbolt protocol, which is currently are part of an ongoing researcher and expected to be revealed soon as ‘Thunderspy 2.’

In conclusion, if you consider yourself a potential target to evil-maid attacks and carrying a Thunderbolt system with you, always avoid leaving your devices unattended or power off the system completely, or at least consider using hibernation instead of sleep mode.

Besides this, if you want to be more paranoid, avoid leaving your Thunderbolt peripherals unattended or lending them to anybody.