Bypass your cellular carrier with this Mobile app

This summer, when some of my family spends a few weeks in Europe, they’ll be using there Verizon smartphone to call home — and it won’t cost us a penny more.

We use Vonage voice over IP telephony service for our home phone. Vonage Extensions, the VoIP provider’s dialer app for iOS and Android phones, turns your smartphone into another extension on your Vonage VoIP service. No charges for calls, even to and from Europe! But wait…

Until recently, each Vonage Extensions call still had to be connected through the carrier’s cellular network, and that meant you were using up either mobile minutes or megabytes of your data plan. The app was still useful when placing international calls from the U.S., since our Vonage plan includes toll-free calling to Europe. But it was a nonstarter when calling from abroad, since Verizon bills as much as $1.29 per minute for voice calls and $20.48 per MB for data.

All that changed last December when Vonage Extensions added support for Wi-Fi. That means you can make calls from your virtual Vonage extension from anywhere you have Wi-Fi connectivity and completely bypass the cellular network. That’s important because while third-party telephony apps have allowed users to avoid using airtime minutes by routing calls over their data plans, the days of metered data are now upon us. Whether you exceed your airtime minutes or your data plan maximum the all-you-can-eat data buffet is becoming a thing of the past. My family still has an unlimited data plan, but when they trade in that iPhone 4 with the cracked screen for a new model this August the free lunch will be over.

Of course, that unlimited data plan is useless when calling from Europe. So our plan is to completely turn off the cellular radio in the iPhone while away and configure the device to function exclusively as a Wi-Fi telephone. The one downside: Since their calling from an “extension” of our home phone accountthey won’t be able to call us on that number. But they can call our business lines as well as our mobile phones.

For me, Vonage Extensions has another potential benefit: I could lower the number of voice minutes I need in my mobile contract and save about $20 per month. The way mobile contracts are structured you’re always either leaving unused minutes you paid for on the table or paying through the nose for every minute you go over the plan amount. In my situation, for 10 or 11 months of the year I never get anywhere near my minutes cap. During those months I’ve bought more minutes than I need – wasteful. But then there will be one month, or maybe two, when I go over — and then I pay up big time. Typically those charges have been in the range of $40-$60 per incident. So do I upgrade for the worst case scenario and over pay 90% of the time or stick with what I need on average and pay the piper during those times when I go over? Now I won’t have to pull out the calculator.

Unfortunately for me, there’s a catch: Each Vonage account only gets one Vonage Extension for free, and my daughter has it. Setting up an additional app would cost an additional $4.99 per month, or about $60 a year.

I’ve been testing Vonage Extensions for about a week on a Galaxy Nexus phone and so far performance has been flawless. The user interface is clean and simple to use…

…and setting up the phone to use only Wi-Fi is easy as well. 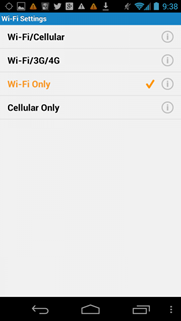 So far so good.

My daughter started using the app last week and liked it so much that she dropped the icon into her iPhone’s task bar. She also has Skype as a backup, which will allow free calls to our mobile phones or computers so long as we’re logged into our Skype accounts. (Vonage offers a similar service, called Vonage Mobile). So far so good here as well.

But the big question — and we won’t have an answer until she arrives — is whether the quality of broadband in Germany will be sufficient to support VoIP. From what I hear it can be pretty sketchy. I guess only time will tell for sure on this one.