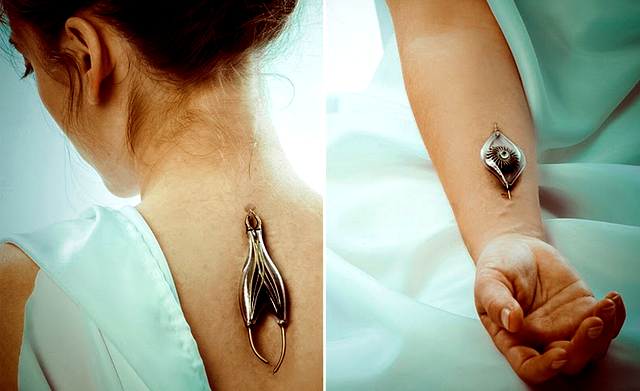 If you thought using the human body as a power source was something confined to movies like The Matrix, one Israeli artist is out to prove you wrong – and with a project that most definitely crosses the line from cool into creepy.

Naomi Kizhner, an Israeli graduate student, has designed a range of jewellery that interfaces intravenously with its wearer – that is, it sticks right into your veins and uses the movement of your blood pumping around your body to create charge. So next time you run out of battery on your mobile, you might not be asking around for a charger – you might be plugging your phone right into your veins.

The eerily beautiful and beautifully creepy devices work by pumping blood past a small wheel inside, generating charge and transferring it via a clip-on wire.

Rather than trying to make the public accept her creepy new idea, Kozhner is embracing the horrified reactions.

“I wanted to provoke the thought about how far will we go to in order to ‘feed’ our addiction in the world of declining resources,” she told reporters.

“There are lots of developments of renewable energy resources, but the human body is a natural resource for energy that is constantly renewed, as long as we are alive. I wanted to explore the post-humanistic approach that sees the human body as a resource. Will we be willing to sacrifice our bodies in order to produce more energy? My intention is to provoke a discussion.”

The jewellery is part of a project that Kizhner is calling “Energy Addicts”. The project includes three pieces: The Blinker, The E-pulse Conductor and The Blood Bridge.