Cisco snaps up AppDynamics for $3.7B right before its IPO

Cisco said that it would acquire AppDynamics, which helps companies monitor application performance, for a whopping $3.7 billion.

And now, it would seem that AppDynamics’ long-awaited IPO (this week!) has been called off in favor of a giant acquisition. It isn’t Cisco’s first major acquisition in recent memory — in fact, the company has been quite active — with the company paying $1.4 billion for Jasper Technologies. All these seem to be moving Cisco from its era of its core hardware networking business. The idea of networking in general has evolved over time as new kinds of devices find their way onto the Internet, and now it would seem Cisco is continuing that move beyond its usual competency.

AppDynamics may have even been testing the waters of the IPO market to set a value for itself for negotiations with larger companies for a potential acquisition. It’s not entirely uncommon that companies are working to not only drop a filing and intent to go public while having acquisition talks behind the scenes.

“Applications have become the lifeblood of a company’s success. Keeping those apps running and performing well has never been more important,” the company said in a release. “Unfortunately, that job has only gotten harder, as IT departments and developers struggle with a tangled web of disconnected, complex data that’s hard to understand. The combination of Cisco and AppDynamics will allow us to provide end to end visibility and intelligence from the network through to the application; which, combined with security and scale, and help IT to drive a new level of business results.”

AppDynamics helps its customers monitor the performance of business applications, which help them get a deeper look into the guts and inner workings of their applications. By having a better overview, companies can more effectively spot chokepoints and performance issues that may be potentially holding back transactions and other kinds of action. The idea there is to catch issues before they become major issues and huge headaches for those companies. For Cisco, that means that it’s going to get yet another touchpoint for companies and offer them a more complete stack to help them run their businesses.

These kinds of major moves have been pretty much necessary for Cisco. In August, the company said it would pare back 7% of its workforce. It’s clear that the company is trying to rejigger itself, and bringing on board a new service like AppDynamics widens its portfolio of tools for potential clients. And of course, each new business it gets in the door with one service can also be converted to others.

AppDynamics was already competing with the likes of New Relic and larger incumbents, and the acquisition will bring Cisco into even further and deeper competition with other software providers in the space. So of course it’s a risky play, but it seems pretty clear that Cisco is willing to take those kinds of risks and figure out what it looks like in 2017.

Indeed, AppDynamics might have seen the signs that its IPO would be well-tested given the performance of New Relic. That company’s stock has had a bumpy road and has ended up largely unchanged over the past few years. AppDynamics filed to go public in December, where it showed decent revenue growth but slightly widening losses. Enterprise companies that are generating a profit generally seem to be palatable to public markets, whereas AppDynamics seems like it was in the growth stages of its life. 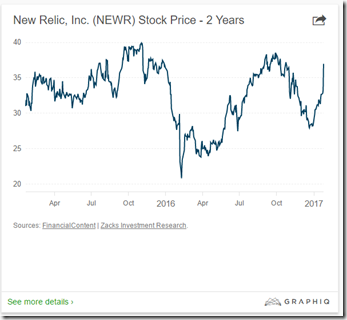 But there’s also a minor subtext to note here: the first IPO of 2017 has been effectively called off. There have been a lot of major tech IPOs that have been in the tea leaves this year — Dropbox and Spotify among them — as well as ones that are pretty much confirmed like Snap. But for now we’ll have to wait a little longer to see what the market thinks of tech IPOs this year.

AppDynamics previously raised $314.5 million, and was most recently valued at $1.9 billion. So the exit looks like it’s about a 2x jump from its previous valuation — which is not all that bad of an outcome in the scope of larger enterprise deals. The deal will be in cash and assumed equity awards, Cisco said in a statement.