Summertime means vacation time, and many of us brag share our plans on social networking sites like Facebook and Twitter. A recent survey by MoneyGram found that nearly one-third of consumers aged 18-49 post details about their vacations on social media before or during their trip, essentially broadcasting to the world when they will be away, where they are going, and what they will do – and more than just friends are watching.

“Sharing summer travel plans can serve as an invitation for criminals to target family members with the relative in need scam,” warns MoneyGram, a leading global money transfer company. In the so-called “family scam,” cybercrooks target elderly family and friends of people traveling on vacation with frantic late-night phone calls or emails from a hijacked account. They make up an emergency situation and instruct the victims to wire huge sums of money to “rescue” their relatives from nonexistent predicaments. Some users have experienced this firsthand. 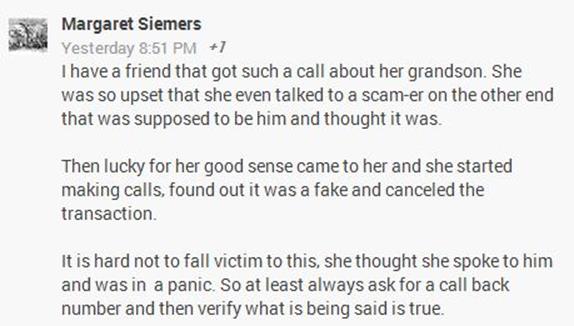 According to MoneyGram, victims of family scams lost an average of $1,551 each time money was sent to a scammer – with a total of more than $8.5 million in attempted transactions during summer 2012.

“When families go on vacation, they don’t do their relatives any favors when they post Facebook pictures and tell everyone how long they’ll be gone,” said Barbara Fore, an elder-related-crimes investigator for the Seminole County Sheriff’s Office in an Orlando Sentinel article. “Criminals are monitoring things like Facebook all the time, and they can often find out just about everything they need to know to run their cons.”

MoneyGram advises that “the safest way to respond to a frantic phone call is to simply hang up and call your relative directly to verify the situation, or verify the identity of the person on the other end of the line or email by asking questions with answers that only true friends or family members would know. These steps often reveal the attempted fraud, preventing any further emotional distress or monetary losses.”