NSA Whistleblower Edward Snowden is among the backers of a new surveillance app that helps guard against computer hijackings.

Haven is an open source app that will run on any Android phone, particularly inexpensive and older devices. It operates like a surveillance system, using the device’s camera, audio recording capability and even accelerometer to detect movement and notify a user. The idea is that, even with the best encryption in the world, a device is vulnerability to physical, in-person tampering — also known as “evil maid” because literally a hotel maid could access it.

The app was developed by The Guardian Project, Freedom Of The Press and Snowden to offer eyes and ears to prevent, or at least increase awareness, of whether a device has been tampered with.

So, for example, you’d set up a burner Android device in a hotel safe alongside your laptop. Haven could then be set to broadcast any audio or movement, basically if anyone opened the safe it will snap a photo, record audio and detect motion. Alerts can be sent via SMS, Signal or to a Tor-based website.

Writing for The Intercept, Micah Lee, a member of Freedom Of The Press who help set up and test the app, admitted that the app does have some shortcomings — such as maintaining constant internet access for notifications, preventing battery drain and false positives — but it offers something new for those who would welcome the peace of mind from additional surveillance. While beyond helping keep hardware secure, it could also have other uses.

“Haven can also be used as a cheap home or office security system to detect break-ins or vandalism while you’re away, positioning the phone to send you photographs when someone walks within range. Or you can use it to monitor for wildlife in rural areas, or to capture evidence of human rights violations and disappearances,” Lee wrote.

Or even something more festive… 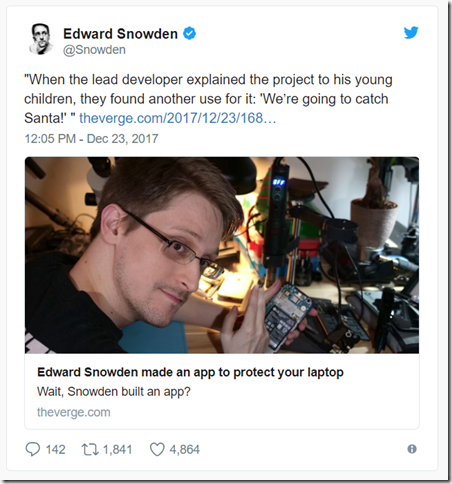 Snowden, who remains exiled in Russia, previously helped develop an iPhone case that detects when a device is transmitting data that can put users at risk of detection, and he’s been very vocal about services that he believes are problematic for privacy. He previously advised that people get rid of Dropbox and avoid using Google and Facebook and has spoken at length on why data collection is “the central problem of the future.”