Encrypted chat app Signal goes down for some users

If you’re having problems with Signal, you’re not alone. On Friday, many users took to Twitter to report that beloved encrypted messaging app Signal was offline. While some users have been unable to access Signal’s servers since around 11AM PT, others have only seen delays in sending and receiving messages. 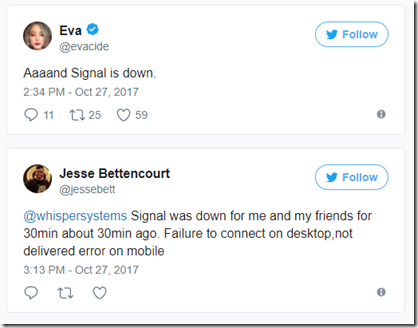 “Signal is back after a brief service interruption,” Open Whisper Systems wrote in a tweet at 12:21 PM PT. “We appreciate your patience as we added more capacity to resolve connection errors.”

On mobile, one Signal message I sent went through after 15 minutes, but the friend I sent it to didn’t seem to be having any trouble at all. Meanwhile, Signal on desktop completely stopped working, stalling out sent messages in what’s usually a lively group thread. Some of our New York-based team is seeing slight delays, but things look mostly up for the handful who sent a test message.

As things come back online, let us know if you have continued issues.