Expect Facebook To Turbocharge ‘Notes’ Into A True Tumblr Competitor

Facebook used to have a blogging feature called Notes. It still does, but it got buried by the Timeline redesign and widely forgotten. Facebook needs to overhaul Notes, and signs say a refresh may already be in the works. It could help people express themselves, make Notes a legitimate competitor to Tumblr, and soften the blow of Facebook reportedly failing to buy Yahoo’s new baby.

Back in March, Facebook acqui-hired the team from Storylane, a sort of blogging platform its founders described as the “the home for personal thoughts and stories that go deeper than a quick Facebook or Twitter update.” It illustrated the rift between Facebook and Tumblr. Twitter is defined by its simplicity, so we’ll leave it out of this discussion.

When it comes down to it, Facebook is more limiting but consistent and easy for the masses. Tumblr gives you more freedom and control. Facebook’s brevity is sufficient for some, but others crave a more customizable presence on the web that’s separate from reports about their day-to-day life. If Facebook wants to house our whole digital lives, it may need to get serious about blogging. It’d be a big undertaking for the social network that could take a while to come to fruition. But better Notes could fill it with high-quality content, pull in ad views, and box out competitors trying to pick away at the Facebook empire.

Updates Vs Blogs: The Difference Matters

On Facebook, you write ‘status updates’ — short descriptions of your current life to keep your friends in the loop. They’re typically concocted for the news feed, rather than your Timeline, and have to adhere to Facebook’s style and format standards. They don’t have a home you’d be proud to show off.

Tumblr blogs feel like you’re writing for yourself. Strange, longer-f0rm dives into niche ideas that might weird out your Facebook friends fit naturally on your own blog alongside quick hits of images and content you’ve stumbled across or created. Tumblrs reach a like-minded audience of those who seek them out, rather than being forced on your social graph. There’s an emphasis on reblogging — lending your audience to content you appreciate. On Facebook there’s not much of a re-sharing culture. You just ‘Like”, which nets creators much less added influence. 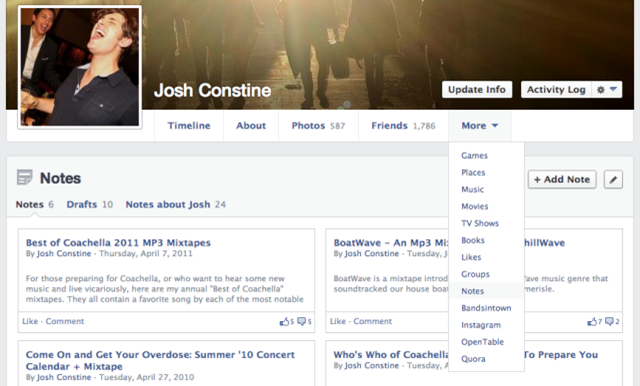 When Notes launched in 2006, Facebook’s user base may not have needed it. It was around the same time the site was opening up to the public, and launching the news feed and status updates. For most of the social network’s users, short-form updates were enough. But the world has grown more tech savvy in the seven years since. People increasingly long for a place to call their own on the web. That desire, along with network effect and an improving state of mobile, led to massive, hockey-stick growth for Tumblr in 2010.

Now the signs say it’s time for Facebook to get back in the blogging game. There’s the Storylane acqui-hire. When that went down I asked Facebook about Notes and it was atypically cagey, which made me suspect something was in the works for the feature. Then there was Forbes’ report that Facebook was in talks with Tumblr about a potential acquisition before Yahoo successfully bought the startup. When I asked Facebook’s spokespeople flat-out whether the social network was redesigning Notes, I was met with a coy look and vague advice to watch out for something.

If you remember, Facebook launched its own Camera app just weeks after announcing it would buy Instagram. It had been working on it for a while and decided to launch it anyways. Similarly, a Notes overhaul may be in store, but without a successful acquisition of Tumblr running in parallel.

Facebook’s got a long way to go if it wants Notes to seriously compete with Tumblr and other populist blogging platforms. As of a few years ago I was one of the few people I knew using the feature. I’d employ Notes to host sets of links and descriptions of mixtapes I’d made or a calendar of upcoming concerts I’d compiled. Now I pretty much only see Notes used by outgoing Facebook employees leaving a long goodbye message, or Facebook divisions like Engineering posting deep descriptions of their latest coding adventures. I’m friends with a lot of power users, and if they’re not Noting, I bet the feature has quite poor traction overall.

It’s not hard to see why. First, Notes is totally buried. You have to fish the bookmark out of your massive list of third-party apps. Writing a Note presents you with a sterile white canvas, with no hint of personalization. You can add basic text formatting and some markup, plus embed photos. However, you can’t add videos or animated .Gifs, Tumblr’s lifeblood. Once you publish, the Notes get published to the news feed (probably their greatest strength), but live on a boring white feed hidden within Timeline’s “More” drop-down or the optional Notes section.

Compare that to Tumblr where there’s a wealth of customization options, and the ability to embed most kinds of media. Posts are distributed to a Tumblr’s followers. The Tumblr dashboard might not be as popular as the Facebook news feed, but there, posts don’t have to compete with the barrage of other content types.

To make Notes competitive, Facebook would need to make the product instantly accessible from the home page. It could become a selectable feed in the recently launched news feeds menu, and you could opt to write them straight from the status update composer. If someone actively writes, Facebook would need to prominently display a link to their feed of Notes on their profile so friends could discover their posts beyond the feed. Notes would need to offer stylish themes, accept more media types, and preferably support drag-and-drop uploading and formatting.

Figuring out privacy could be a challenge. Typically, blogs are public but Facebook is usually about sharing with friends. Defaulting to public would make Notes more sharable and help Facebook rack up ad impressions through page views, but it’d need to ensure people don’t accidentally expose themselves. Tumblr’s optional anonymity, NSFW content, and it simply not being Facebook all give it a coolness edge is some respects.

As for incentivizing authors, making it quick to reshare a Note (like reblogging on Tumblr) could give people wider reach than just their friends. That could attract both average Joes who don’t have much of an audience (similar to the intention of Quora’s new blogging feature), as well as public figures looking for massive influence.

On the business end, highly viral Notes could bring in traffic, but also box out Tumblr, which wants to monetize with sponsored posts in the dashboard that could compete with Facebook for ad dollars

In the end, the goals would be to:

If given a proper reintroduction, Notes might be a departure from Facebook’s highly standardized look. Keeping tighter control of how people expressed themselves made Facebook easier to use and differentiated it from the chaos of Myspace. But if done right, Notes could give people a vivid way to share and connect. It could make sure Facebook hosts not just our pasts with Timeline, or our day-to-day with news feed, but also be the manicured nest for our deepest thoughts and the content we love.

Considering Facebook’s penchant for naming things what they are, I wouldn’t be surprised to see Notes eventually revived as “Facebook Blogs”.

Postscript: Too bad it didn’t do this a few months ago before Tumblr became such a media darling. Now whatever Facebook does in blogging may be cast as a copy in Tumblr’s shadow.