Gang Hacked ATMs from Inside Banks

An organized gang of hackers from Russia and Ukraine has broken into internal networks at dozens of financial institutions and installed malicious software that allowed the gang to drain bank ATMs of cash. While none of the victim institutions were in the United States or Western Europe, experts say the stealthy methods used by the attackers in these heists would likely work across a broad range of western banks.

Most cybercrime targets consumers and businesses, stealing account information such as passwords and other data that lets thieves cash out hijacked bank accounts, as well as credit and debit cards. But this gang specializes in hacking into banks directly, and then working out ingenious ways to funnel cash directly from the financial institution itself.

A number of the gang’s members are believed to be tied to a group of Eastern European hackers accused of stealing more than USD $2 million from Russian banks using a powerful, custom-made banking trojan known as Carberp. Eight men in Moscow were arrested in 2012 and accused of building and using Carberp, but sources say the core members of the gang were out of jail within hours after their arrest and have been busy rebuilding their crime machine ever since.

According to report released today by Fox-IT and Group-IB, security firms based in The Netherlands and Russia, respectively, the Carberp guys have since changed their tactics: Instead of stealing from thousands of bank account holders, this gang has decided to focus on siphoning funds right out of banks’ coffers. So far, the security firms report, the gang has stolen more than $15 million from Eastern European banks.

Incredibly, the group also reportedly bought access to Windows PCs at targeted banks that were already compromised by opportunistic malware spread by other cyber criminals. Indeed, Fox-IT and Group-IB report that the Anunak gang routinely purchased installations of their banking malware from other cybercriminals who operated massive botnets (collections of hacked PCs).

Once inside a financial institution, the criminals typically abused that access to launch even more convincing spear-phishing attacks against other banks. They also gained access to isolated bank network segments that handled ATM transactions, downloading malicious programs made to work specifically with Wincor ATMs. The hackers used that malware — along with a modified legitimate program for managing ATM cash trays — to change the denomination settings for bank notes in 52 different ATMs.

As a result, they were able to make it so that when co-conspirators went to affected ATMs to withdraw 10 bills totaling 100 Russian rubles, they were instead issued 10 bank notes with the denomination of 5,000 rubles, the report notes. 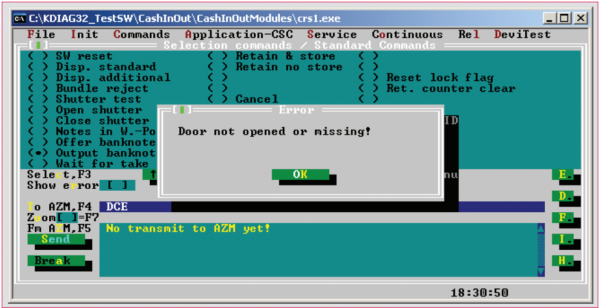 It was bad enough that this group is believed to have hacked into more than 50 Russian banks, but nasty messages encoded into the malware tools employed by the thieves suggest they hold utter contempt for their targets. One malware component the group used to infect targeted systems carried inside of itself the text string “LOL BANK FUCKIUNG”. Another strain of malware deployed by this group’s targeted email campaigns and used to build their own botnet of more than a quarter-million PCs was encrypted with a key that is the MD5 hash of the string “go fuck yourself.”

While they appear to have developed a penchant for stealing directly from banks, these crooks aren’t above going after easy money: Sources tell KrebsOnSecurity that this group of hackers is thought to be the same criminal gang responsible for several credit and debit card breaches at major retailers across the United States, including women’s clothier Bebe Stores Inc., western wear store Sheplers, and office supply store Staples Inc.

A separate source previously told this author that there was a connection between the point-of-sale malware used in the breach at Michaels and the Staples incident, which means this group may also have been involved in the Michaels breach. In any case, Group-IB and Fox-IT note that the Anunak gang has hit a total of 16 retailers so far.

The attacks from Anunak showcase once again how important it is for organizations to refocus more resources away from preventing intrusions toward detecting intrusions as quickly as possible and stopping the bleeding. According to the report, the average time from the moment this group breaks into bank internal networks and the successful theft of cash is a whopping 42 days.

The full report on the Anunak group is available here (PDF).