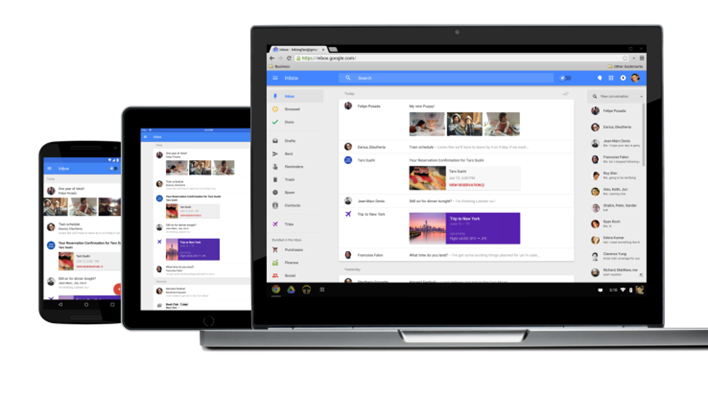 Google announced that Inbox, the Gmail-based mobile email client the company launched late last year, is now open to all. Until today, you still needed an invitation to use the service, though invites have long been pretty easy to come by.

Google says it will also open up Inbox to all Google for Works customers (whose admins enable this feature for them) through the early-adopter program starting today.

With this update, Google is also bringing a couple of new features to its newest email client. The overarching theme for these updates (and really Inbox as a whole), is to help users save time, Google senior product manager for Inbox Shalini Agarwal told me.

If you’re a frequent traveller, you will appreciate Inbox’s new Trip Bundles feature. Inbox alreadyautomatically organizes your email into different groups based on their content (promotions, updates, emails from social networking sites, travel sites, etc.). Trip Bundles takes this to the next level — but only for email about upcoming trips.

Inbox now automatically groups all the messages about a trip into a single bundle, so you have direct access to your flight, hotel booking and rental car reservation information. Inbox will then extract the information from these emails and put it all into one easily readable format that’s not unlike what you would see in Google Now, for example.

As you go about your trip, the bundle will highlight what Google believes is the most important information you need right now. Before your flight, that’s obviously your flight data, but after that it’s probably your rental car reservation and then your hotel booking.

Another interesting new feature involves reminders, which have always been a key part of Inbox. Now, when Google notices that somebody asks you to do something in an email (maybe to buy that ticket for the next trip), Inbox will automatically suggest that you set yourself a reminder to do that. Agarwal tells me that this is powered by the same tech Google already uses to categorize emails.

Reminders will now also sync between Google Keep and Inbox.

With this update, developers will now also be able to embed deep links to native apps into emails. Google has long supported what it calls ‘highlights.’ That’s the special email markup airlines use, for example, to allow Google to easily get your flight information from an email and display it Gmail and Inbox, including the Trip Bundles feature. Now, they will also be able to add deep links to their native apps, so users don’t have to switch to a web view (where they may have to sign in to a service again, too) to see more information. Launch partners for this feature include Hotels Tonight and Eat24.

Other new features include the ability to recall any email within the first 10 seconds after you first hit send (just like you can do with the Undo experiment in Gmail Labs), custom email signatures for Inbox that will sync across devices (but not your Gmail account) and the ability to switch Inbox’s swipe gesture from marking emails as done to deleting them by default.

Agarwal told me all of this focus on Inbox doesn’t mean the company has forgotten about Gmail.

“We think about Gmail and Inbox differently,” she said. “Gmail is our best-in-class email product and we want to keep it that way.” Inbox’s focus is slightly different, though. With Inbox, Google wants to “help people get back to the things that matter in their life.”

Still, it’s probably fair to assume that some of these Inbox features will find their way into Gmail at some point.