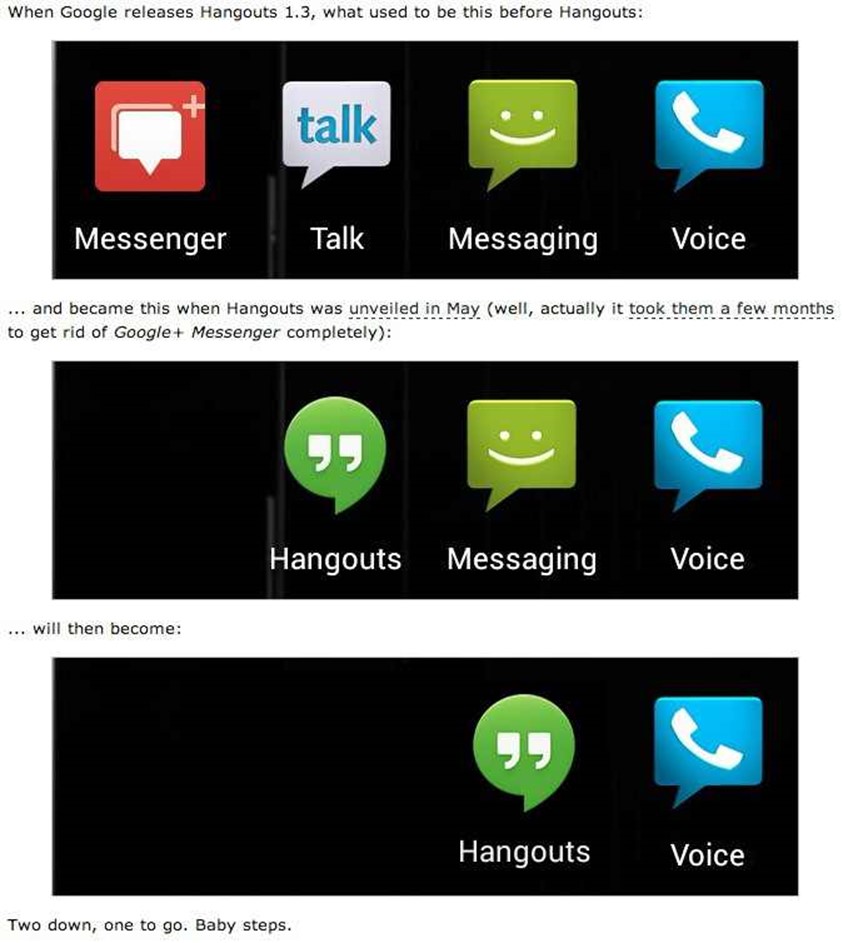 We’ve heard that Google Voice is getting dragged to the trash can and most of its functionality will be incorporated into the G+ Hangouts apps on both Android and iOS. This has already happened to an extent with the ability to phone friends on Hangouts, but we’re hearing the full shuttering and depreciation of the app is the next step.

What’s interesting here is that VoIP-to-phones is expected to be integrated into the Hangouts iOS and Android apps so that, just like with the Web version, you could be able to actually make (and receive) VoIP calls directly from your Google phone number. Whether the carriers and Apple are okay with this isn’t certain, and the thought is that it could be enabled by carrier like Apple’s FaceTime (or could be scrapped altogether) depending on the global market and the carrier.

Google recently allowed Hangouts to take over the SMS functionality of Android phones, and as Android Police points out in the image above, the direction in which Google is trending seems to be pushing all telephony communications into Hangouts.

The VoIP functionality would allow those willing to trust Google with their number to have a way to drop their carrier voice plans altogether – an extremely controversial move and one we’d expect to see challenged by carriers.

No specific timing on the Google Voice migration was given, but it is said to be “months out” which would make Google I/O a good bet for an announcement. The move is part of a larger overhaul on the company’s apps which we’ll have more info on later this week.

Some of y’all are freaking out for no reason. The headline is terrible, so I get it. Google is not “killing” Google Voice. They’re merging Google Voice functionality into Hangouts. They ARE, however, killing the Google Voice API. Which means that third party apps that currently use Voice will cease to function once the merger is complete.

Your Voice number is not going away. Voice functionality is not going away. They’re simply replacing the Voice app and shunting those features over to Hangouts (and, as mentioned by others, this is already available on iOS). I’ve been anxiously awaiting this, as third party solutions (like GrooveIP) are very kludgey and don’t work well or reliably.