Google Search Now Surfaces App-Only Content, Streams Apps From The Cloud When Not Installed On Your Phone

Google is making a big change in terms of its ability to surface the content found in mobile applications through Google search: it’s no longer requiring that apps have matching web content in order to be indexed through Google’s search engine. In addition, when Google finds in-app content that points to a mobile app you don’t already have installed on your smartphone, it will offer you the option to “stream” the app instead.

That doesn’t mean it will point you to some functional mobile web version of the app – “streamed” apps are actually running on virtual machines on Google’s cloud platform, and respond to your taps and touches similar to how native applications do.

This new streaming option and the improved version of app indexing is rolling out now, but is only currently enabled for a handful of launch partners, including Hotel Tonight, Weather, Chimani, Gormey, My Horoscope, Visual Anatomy Free, Useful Knots, Daily Horoscope, and New York Subway. 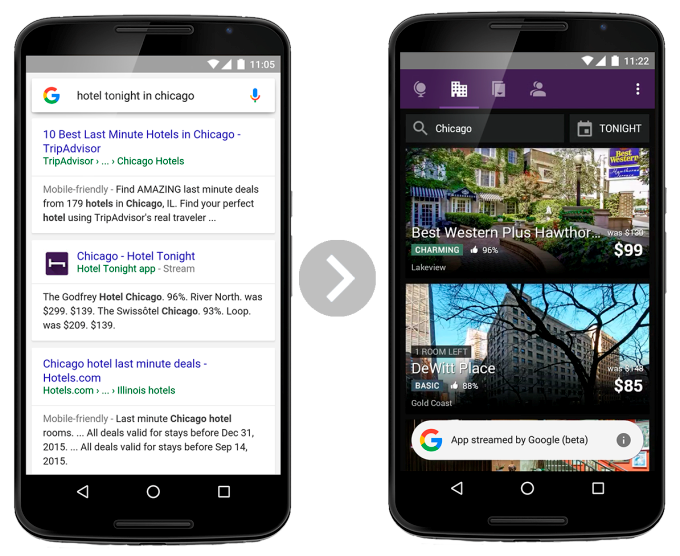 The debut partners were chosen after expressing interest in testing out the new Google’s app-only indexing functionality when it was previously announced at Google’s developer conference, Google I/O.

Google has actually been indexing the content of mobile applications for two years now, as a move against the search giant’s potential obsolescence as the world of computing increasingly shifted off the desktop and to take place inside native applications running on consumers’ phones. Since its launch, Google has expanded its ability to surface “deep links” (links that point to pages inside an app) from beyond a small set of early adopters on Android and now indexes applications across both major mobile platforms, iOS and Android.

Thousands of apps have already been indexed – meaning their content can appear as a Google search result. Today, Google has 100 billion links within apps indexed, the company says. It also points users to apps they can install on their smartphones and tablets when it finds relevant content related to your search query inside mobile applications.

But one of the challenges with the way the app indexing process worked in the past is that it required a mobile app developer to have matching web content that mirrors what’s inside their app. That meant mobile app developers would have to have a full-fledged website as well.

“In the U.S., it’s more often the case that content is both on the web and in an app mainly because the U.S. market evolved from being a desktop Internet market and then migrated over to mobile,” explains Rajan Patel, the director leading the app indexing team inside Google. That means apps like Facebook, Twitter, Airbnb, and others already have reasonable mobile web experiences. 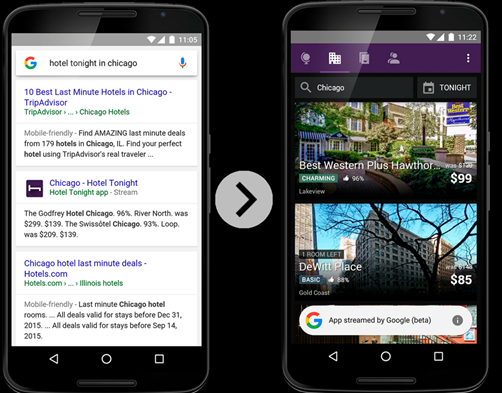 For example, a national parks application called Chimani, one of the debut partners for the new initiative contains information not found on the web as does an app for the New York Subways system.

“We want users to be able to have access to this content, regardless of whether it’s available on the web or in an app,” says Patel.

To make this possible, developers only have to implement Google’s app indexing API, as before, which helps Google to understand what a page is about and how often it’s used. It has also scaled its ranking algorithm to incorporate app content. (Google had actually been ranking in-app content prior to this, but now it no longer requires apps to have related websites.)

Being able to find and surface content tucked and hidden away inside apps is of crucial importance to a company whose ad business relies on people turning its search engine to find information they need, and click into advertisements related to those queries. Without being able to index the “web of apps,” so to speak, Google’s prominence could fade and its ad business could flounder.

Streaming Apps From The Cloud

But at the same time as Google is figuring out how to find content inside of mobile applications, it’s also testing out a means to surface that content even when users don’t have apps installed – something that, if successful, could potentially be bad for app developers’ own businesses.

After all, if their app’s most valuable information is just a Google search away, what motive would a user have to actually install their app on their phone? Users would have to decide if they plan on using the app frequently enough that having the native counterpart would be an advantage. Or the app would have to offer something Google couldn’t provide, like offline access to content perhaps.

Above: App Streamed by Google (beta)

The ability to “stream” virtual versions of the mobile applications comes from technology Google secretly acquired in 2014, from a startup called Agawi. The company had been developing a means of streaming mobile apps over the web, which included playing mobile games within ad units.

Several former Agawi employees worked alongside Google’s app indexing team in rolling out the new app streaming feature, says Patel, which is the first time Google has launched a consumer-facing version of this streaming technology.

For end users, the way the streaming process works is fairly simple.

A user clicks on a blue link in Google’s search results, and if they don’t have the app installed they see an option to click a link to run the streamed version.

Initially, users will have to be in the Google application on their phone for this to work, being running Android Lollipop or higher, and have a Wi-Fi connection, as app streaming requires a good internet connection. It’s only live in the U.S. for now, as well.

Google also describes the streaming option as more of an experiment for the time being, and is looking to see how users respond before committing to a worldwide rollout or an expansion to iOS. However, its plans for indexing in-app content without matching websites will continue to progress. Links that launch apps will be supported in any browser that supports deep linking technology, including Google Chrome.