Google Search is changing rapidly. Given the company’s love of small, rapid-fire updates, its sometimes hard to keep track of where the company is going, but earlier this month, at the LeWeb conference in Paris, Google Engineering Director Scott Huffman presented a pretty compelling overview of the direction Google is taking in search.

Here’s the gist of it: Google knows our expectations of what a search engine should be able to do is quickly changing. The old “ten blue links” search results page is quickly going away for something far smarter that, according to Huffman, will resemble a personal assistant more than the search tool Google that launched over fifteen years ago. Indeed, that’s what Huffman considers Google’s goal: creating the ultimate personal assistant. The next generation of search, he said, is all about making “all your tasks as you go through the day simpler and quicker.”

That also means that in a large number of cases, you will interact with Google on something that may not even have a screen. The car, he believes, is prime real estate for the Google Search of the future, where you simply interact with the search engine and then engage in a conversation with Google. The living room, too, he believes is a place where Google should just work. That may be on a large screen, but maybe also just through microphones and speakers that wait for your “ok Google” command.

That interaction with Google will be in the form of a back-and-forth conversation, something the company has been working on for a while now. Thanks to its Knowledge Graph, Google has become significantly better at understanding its users intends and it is already able to use voice recognition for at least a limited amount of conversation that is able to work with pronouns (and that’s really the first step in making conversations with computers seem natural). It’s not exactly the Star Trek computer, but it’s a clear first step in the direction Google is taking. Google Now currently handles 38 languages and knows about more than 18 billion facts and their connections. That – more than its search index alone – is what will create the Google of the future. 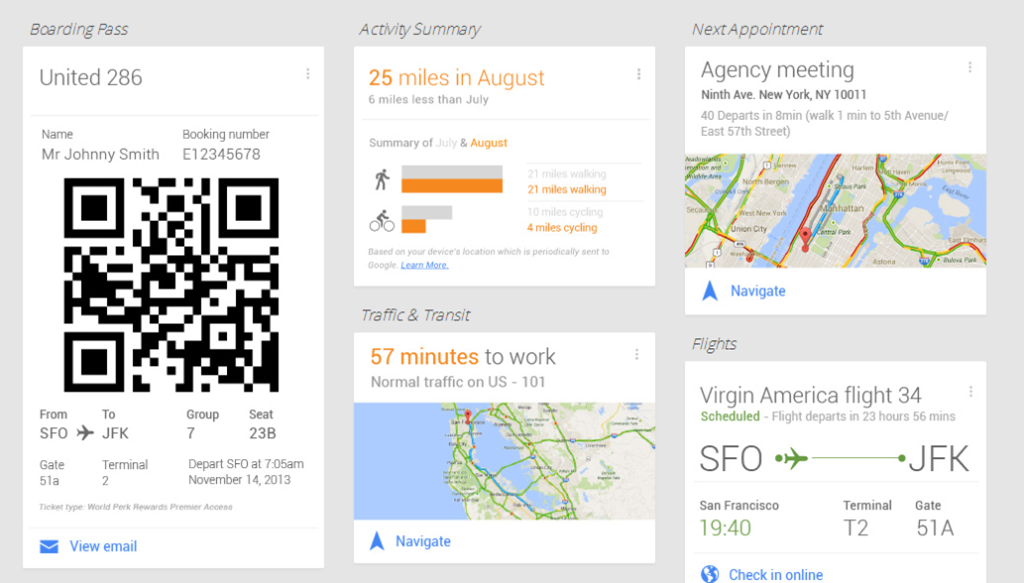 The ultimate assistant, however, needs to be able to do more than just carry on a conversation, though, Huffman stressed. It also needs to be proactive and that’s where Google Now comes in. By knowing about your habits, travel bookings, OpenTable reservations and everything else that can be found by sleuthing through your Gmail inbox, Google Now is already pretty useful. Looking ahead, I would expect Google to continue to build on top of this platform and open it up for developers. Huffman acknowledges that Google is working on this, but there are “lots of tricky questions” the team has to deal with first. How, for example, can Google make sure that notifications from a third-party service are really important? (I would argue that users can figure this out for themselves, but Google likely wants to take a more pro-active role).

Given all of this, the next generation of Google Search may be more about how third-party developers can get their information into the Knowledge Graph and less about tricking Google’s algorithms into ranking their pages a bit higher than their competitors’.