When Microsoft launches the next generation of Surface tablets in two weeks, they’ll be better suited to use in enterprises than the initial offerings, making them both more mobile with longer battery life and better suited for office work with a docking station add-on that gives them Ethernet connectivity. 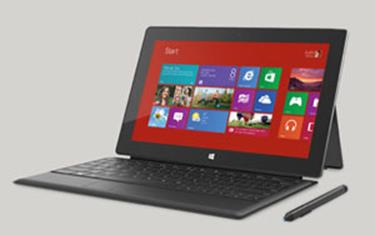 will gain a docking station and battery-powered keyboard/cover.

There are two new models that are upgrades of the original Surface Pro – the full Windows version based on x86 processors – and Surface RT – the ARM-based tablets that run only Modern apps written specifically for Windows 8’s touch-centric interface.

The new models are called Surface Pro 2 and Surface 2, respectively, and feature a different set of upgrades, according to reports of leaked information about them. There’s a New York City launch event Sept. 23, but no availability date yet.

The Surface Pro 2, best suited for corporate use because it runs legacy business applications, will benefit from two accessories, a docking station and a keyboard/cover that includes a supplemental battery. The docking station will enable connecting to a LAN via a Gigabit Ethernet port. With an external monitor and full-sized keyboard it could serve as a traditional desktop and be undocked to take on the road.

To establish Surface Pro 2 as corporate mobile devices they will be built around Haswell chips that burn less power so the battery should last longer than four to five hours like the current version. Microsoft will introduce a new keyboard/cover called Power Cover that contains a battery of its own that will further extend usage time away from a power cord. Pushing the devices to survive a whole workday without plugging in would enhance their corporate value.

An 8GB RAM version of Surface Pro 2 is in the offing, doubling the memory of the original Surface Pro. A 4GB option will still be available.

There’s no firm date when Surface Pro 2 will ship, but that will likely be around the time that Windows 8.1 is available, scheduled for Oct. 18. So the new devices should come equipped with the new operating system, which has a set of corporate-friendly features. These include wirelessly connecting devices to standards-based display screens, using Windows 8.1 devices as hot-spots and support for mobile broadband, the last two of which again improve mobility.

Windows 8.1 devices can communicate via Miracast with other similarly equipped devices, for example, a large conference room display screen so a PowerPoint on the personal device can be shown to a roomful of people. The operating system also supports near-field communication (NFC) connections to printers, so a Windows 8.1 device can print to a local printer so long as it, too, supports NFC.

As for the Surface 2, it will also have a new processor, TEGRA, that will help extend battery life. It gets a higher resolution display – 1920×1080 up from 1366×768 pixels – which can only enhance the user experience.

Still, with its lack of support for traditional Windows applications, it’s handicapped as a business tablet. It also lacks the ability to join domains, although with Windows 8.1 Microsoft has worked out ways to improve security when the devices do connect to LANs.

Surface 2 comes with an abbreviated version of Microsoft Office, which makes it a more attractive business machine and is something missing from an iPad, with which Surface RT competes. Native Windows Modern applications are lacking.

While there are many attractive elements for businesses, these tablets are primarily consumer devices that will likely show up at work as BYOD devices, not corporate purchases.

Both Surface 2 and Surface Pro 2 will have a two-position kickstand for propping them up when used in conjunction with a keyboard. This is not of particular use to businesses specifically, but the option of placing the screens at two different angles makes their use more flexible.