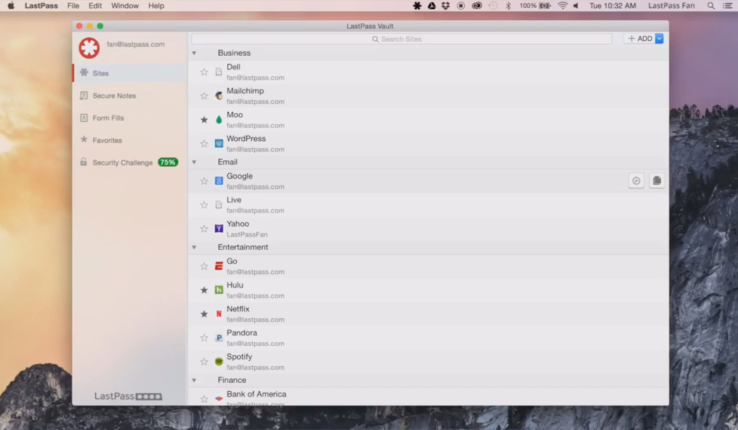 With an increasing number of data breaches putting users’ personal information at risk, a company that helps online users better manage their account information with various websites and services, as well as help customers run security checks on their accounts, seems like it would have the potential for serious growth. That’s what remote access software maker LogMeIn is hoping, as the company announced this morning that it has acquired the password management software maker LastPass for $110 million in cash.

In addition, another $15 million in cash is available in contingent payments if LastPass meets certain milestone and retention targets over the two years following the deal’s close, LogMeIn also noted.

The deal is expected to close in the weeks ahead.

LastPass, a competitor with Dashlane, 1Password, and others, offered a suite of tools to help users stay safe online. Its core product is a password management software application that helps you create strong, secure passwords for the websites you visit as well as keep other private information in “secure notes.” A native desktop application for OS X, released earlier this year, introduced a “Security Check” tool that let users quickly scan all their passwords to see if they were secured properly.

Besides its consumer-facing, freemium products, LastPass offers an enterprise platform used by 15,000 businesses which could manage passwords on things like internal servers, devices and SaaS applications.

According to LogMeIn, the company was interested in LastPass because it believes it could help LogMeIn better position itself in the identity and access management market. The company, though still best-known for its remote access solutions, has been expanding into new lines of business over the years, including remote customer service tools, cloud storage and sync with Cubby, online backup, online meetings with Join.me, and more.

“Identity and Access management represents one of LogMeIn’s top three strategic growth initiatives, along with join.me in collaboration and Xively in the Internet of Things, so LastPass is a great fit for our near and long-term growth plans,” noted a LastPass spokesperson.

When the deal is complete, LogMeIn says it will integrate some of the capabilities of its early identity management investment, Meldium, which it acquired a little over a year ago, into LastPass. But in the near-term, both Meldium and LastPass will operate as separate products and continue to be supported. Meldium, which is a simple password manager for teams, is more focused on business use cases, instead of the consumer market. With this service, when a company hires a new employee, they’re automatically given access to all the online accounts that business uses, but without having to actually share passwords.

This is more complementary to LastPass’s enterprise product, which is likely going to be LogMeIn’s main focus.

Founded in 2008, Fairfax, Virginia-based LastPass had 7 million users at the time of the acquisition, across both the consumer market and the enterprise. There are 30 employees at LastPass, and all have been offered positions at LogMeIn.