LogMeIn has made one more acquisition to build out the features of its online collaboration and meeting app join.me: it has bought Zamurai, a San Francisco-based startup that had built a popular whiteboard app for the iPad. 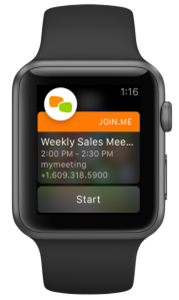 Terms of the acquisition were not disclosed but we understand and have had confirmed by sources that it was a small acquisition worth $6 million — in fact a mystery startup that was alluded to in one of its recent quarterly reports, as BetaBoston pointed out last October.

LogMeIn says that the deal actually closed in late 2014. The app, which had won several distinctions in the productivity app category, appears to still be live in the app store, but it looks like that may not be the case for long: LogMeIn says that in the future the technology, which has now been integrated into new versions of join.me’s apps for the iPhone, iPad and Apple Watch, will now be offered exclusively through join.me.

Update: LogMeIn’s VP of communications, Craig VerColen, confirms that the Zamurai name will go away, and that current Zamurai users will be offered a migration path with the product completely folded into join.me.

In addition to whiteboarding, Zamurai was working on other technologies for real-time visual collaboration, and with the team all coming on to LogMeIn, it could point to further enhancements for join.me down the line.

That’s not much of a surprise: the growing ubiquity of cloud-based services, and improving network connectivity and better devices all mean that the competitive landscape for join.me is growing. Among recent developments, online communication/collaboration platform Slack last year acquired Screenhero, another screen-sharing and voice chat service (like join.me) that lets people come together from remote locations to work on documents that are local to one user or another.

“Mobile innovation is a key focus for join.me. And we believe that a true mobile-first approach means embracing the unique benefits of mobile to boost collaboration, as opposed to trying to duplicate desktop or in-person experiences on a mobile device,” said Bill Wagner, president and COO of LogMeIn, makers of join.me, in a statement. “With the acquisition of Zamurai team, we gain both a team and product that can help us rapidly accelerate join.me‘s mobile-first innovation – innovation aimed squarely at addressing the new realities of today’s inherently mobile workforce.”

This is LogMeIn’s fifth acquisition, with the most recent before this being of Meldium to improve security with single-sign-on management for its services.

Zamurai was founded in 2013 by alums from Symantec and Lockheed Martin. It’s not clear who was backing the company financially, although advisors to the company included the CEO of Wikimedia Lila Tretiakov, CMO of Palo Alto Networks René Bonvanie and the former CMO of Kodak Jeffrey Hayzlett.

Former Zamurai CEO and cofounder Michael Parker now becomes join.me’s VP of marketing. “Both join.me and Zamurai recognize that how people work has changed. We meet and collaborate in real time and more often than not, we interact online. And we were both passionate about the simplicity of the experience for our customers,” he said. “The fact is Zamurai was actually a join.me customer. We used it everyday, so it was obvious how complementary we were together.”