During Microsoft’s earnings call, CEO Satya Nadella indicated that his company would “streamline” its work in music and video. That was interpreted in some cases to imply that Microsoft was walking away from Xbox Music, its beleaguered Spotify competitor.

Not so, it turns out. Today Microsoft’s Joe Belfiore tweeted that Xbox Music was not dead, and that the company will release an update to the service soon: 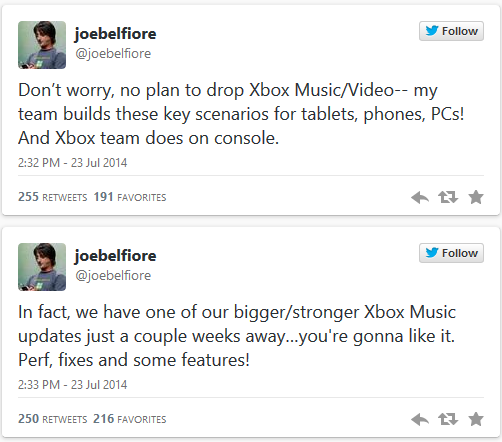 Xbox Music has had a rocky past. In fact, on the Windows Phone subreddit, there is a dedicated thread for issues with the service. I’ve never had much of a good experience with the product.

Microsoft recently killed off its premium content for Xbox. That was pretty non-core to its business model. But offering music to consumers who buy into your platform is pretty par for the course in the current tech scene. So Microsoft has two options: Buy Spotify or make Xbox Music workable. It appears to have chosen the latter.