Microsoft today announced a number of new features for its Azure cloud computing platform ahead of its Worldwide Partner Conference next week. There is quite a bit that’s new in this update, but the highlights are two new Azure regions for the U.S. (US Central in Iowa and US East 2 in Virginia) that will go live next week, as well as the launch of Microsoft’s newest Azure StorSimple hybrid storage arrays for enterprise customers.

Microsoft says bringing two new regions online will help it continue to double its Azure capacity every six to nine months. The company hasn’t yet announced which services will be available in these new regions or what the pricing will look like. There has always been a bit of disparity between Microsoft’s different data centers, but it’s probably a fair guess that its second Virginia data center will look a lot like its current one in the area, and the Iowa location will have slightly fewer services available and will be on par with the current US North Central and South Central locations. The two new regions will join Microsoft’s four existing regions in the U.S. later next week. 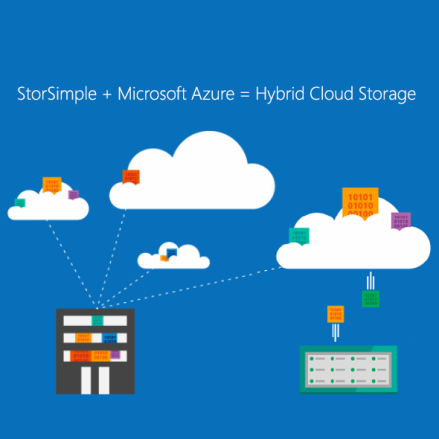 StorSimple is likely a somewhat obscure service for many, but Microsoft has long offered this storage solution for large enterprise customers like Mazda, SK Telecom and GF Health Products. The new 8000 series arrays are more powerful than Microsoft’s existing 5000 and 7000 series StorSimple arrays (hence the higher number). The twist here is that these new arrays can use Azure Storage as a hybrid cloud tier on top of the existing HDDs and SSDs in the system for capacity expansion and off-site data warehousing whenever necessary.

IT can manage all of this from a new dashboard that consolidates all of these features and allows administrators to control all of the storage and data management services included in the service.

Microsoft has long been betting that large enterprises will opt for hybrid cloud deployments for the time being. StorSimple 8000 handles the storage aspect of this for large enterprises, but businesses who don’t quite need the full power of the 8000 series can still opt for the 5000/7000 series, too.

As part of this focus on hybrid clouds, Microsoft also today announced that it will expand access to Azure through ExpressRoute – which allows for private connections between Azure and on-premise infrastructure — to six new locations around the world (up from three in the U.S. and Europe that were available at launch).

But there is more: Azure’s Machine Learning service for big data modeling, which was announced earlier this year, will be available for public preview next week; the Azure Government Cloud is adding more partners and customer solutions, and the Azure Preview Portal — Microsoft’s new central management dashboard for all things Azure — is getting a number of new features, including support for Azure SQL Database