Minecraft Xbox One, Vita And PS4 Edition Arrive This August For $19.99 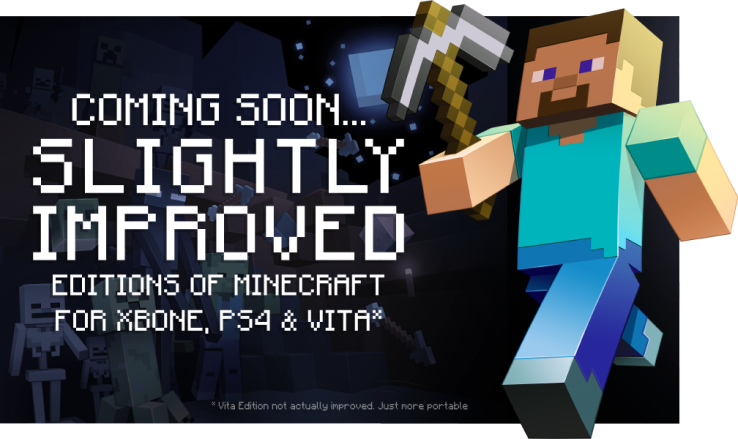 Minecraft is the golden goose, and it lays its golden eggs on all platforms. So far, it hasn’t hit the next generation of home consoles, however, but that’s set to change in August when it arrives on Xbox One, PS4 and in a new PS3 + Vita edition. Mojang announced the news today on its blog, complete with details about how each is “slightly improved.”

Credit to the Minecraft maker for not engaging in hyperbole – these are basically lightly tweaked editions of the extremely popular world-builder/crazily addictive game that originally debuted in 2009. The cost for each is $19.99, but there are discounts if you’ve already bought the Xbox 360 or PS3 versions if you’re upgrading to the Xbox One or PS4 versions, and they offer larger world sizes and greater draw distances than the previous editions.

At this point, Mojang can probably get away with doing this every console generation for the remainder of human existence – my wrinkled hands will probably be typing up a Minecraft Xbox Zeta5 and PS16 Edition release date article come 2046. Just think of the draw distances.