The new Google Maps for Android just started shipping late last night, but folks are already being all grumpy about the sudden disappearance of one of Maps’ old features: offline map mode. In previous releases of Maps, users could save chunks of the map for later use (like when you’re traveling abroad on a roaming plan and downloading a few megabytes of data would cost you somewhere between seven and eight billion dollars.) In new Maps, you can’t.

Google says the feature just wasn’t totally ready for the new version yet. But wait! There’s an easter egg that kinda-sorta brings it back. 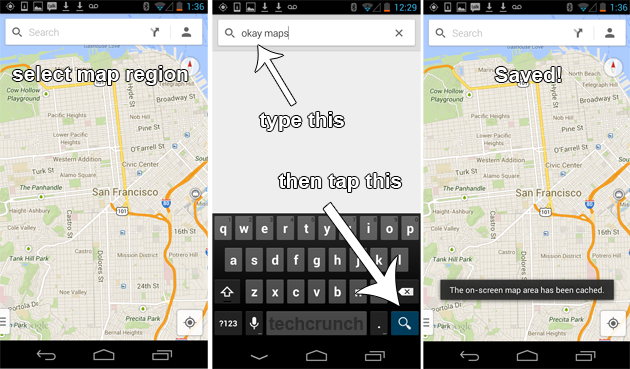 When you want to cache a map for later perusal, here’s all you’ve got to do:

It’s not quite as easy as the old “Make available offline” button used to make it and it might freak out every once in a while (hence it being an easter egg), but it seems to get the job done.

(Note: You’ll obviously need to be on the newest, just-released version of Maps [the one without offline map mode built right in] for this to work. Also, just like with the old Maps app, navigation and directions won’t work offline. Those sorts of things are churned out on Google’s servers. This just saves a copy of the map data to your phone. Use it to avoid walking down a dead-end alley to Stabsville while traveling or otherwise data-less, but don’t expect the rest of Google Maps to work.)