On Tinder, “Hookup Culture” And Talking About Sex

A great way to get onto TechCrunch is to make a joke about a billboard you saw on your way to go bridesmaid shoe shopping for your best friend’s wedding and put it on Twitter on a Sunday morning. Which is how this. 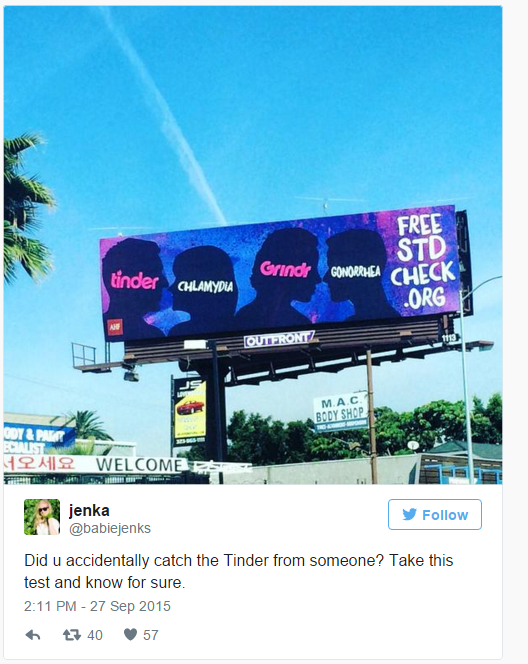 “Is that a real billboard?” read @Drew’s DM.

On my way back from the shoe store, I’d spotted another one by the Sunset onramp to the 101.

In the sober light of Monday morning, however, Tinder was characteristically not thrilled to be part of a public health campaign reminding everyone in Los Angeles about the potential consequences of their hookups, which the app may have facilitated. According to LA Weekly:

Tinder recently fired off a cease-and-desist letter to the nonprofit organization behind the billboards, Hollywood-based AIDS Healthcare Foundation, arguing that the advertising “falsely” associates the app “with the contraction of venereal diseases.”

The letter, written by Tinder attorney Jonathan D. Reichman, says the billboard’s “accusations are made to irreparably harm Tinder’s reputation in an attempt to encourage others to take an HIV test offered by your organization.”

The lawyer goes on to argue that the ad campaign’s “statements” are not based on science and would not withstand “critical analysis.”

Tinder, which the letter says “strongly supports such testing,” accuses AHF of false advertising, disparagement, libel and interference with its business.

The app demands that AHF take down its billboards.

It doesn’t appear that the organization is going to relent. In a TV news interview over the weekend, AHF president Michael Weinstein argued that apps like Tinder’s are responsible for an uptick in STD reports.

AHF chief counsel wrote to Tinder’s lawyer to say the billboards would remain and that the group has not made “any false or disparaging statements against Tinder.”

The foundation indicated that it ultimately wants hook-up apps to display the equivalent of “drink responsibly” warnings for those about to get into bed with strangers.

It’s a very interesting idea, especially considering the app’s younger users. As I wrote previously, in this summer of too much heat and the friction of rapidly accelerating shifts in sexual mores:

The question AHF is provoking is what can it teach them (and everyone) about safe sex?

Neither alcohol nor tobacco decided to add warning (or even moderation) messages to their products of their own accord. Even the life-saving seatbelt laws we all now take for granted were the result of the tireless efforts of Mothers Against Drunk Driving.

Of course the big hurdle for Tinder would mean coming to terms with the reality of how people use and perceive their product. To adopt a safe sex message would mean accepting their cultural role as a “hookup app,” something the company has only ever sought (sometimes preposterously) to disavow.

As sex and relationship columnist Dan Savage says, “When an opposite sex couple gets to consent, when they get to yes, we are going to have sex — they stop talking to each other. They stop communicating, and negotiating. When two dudes get to yes, it’s the beginning of the negotiations — it’s the beginning of another conversation. Who’s gonna do what, to who? And that conversation makes us better at sex.”

In the end, perhaps encouraging conversation when it comes to sex — even and especially conversation around safe sex — could be a good thing for an app that has become synonymous with the mainstreaming of hookup culture.