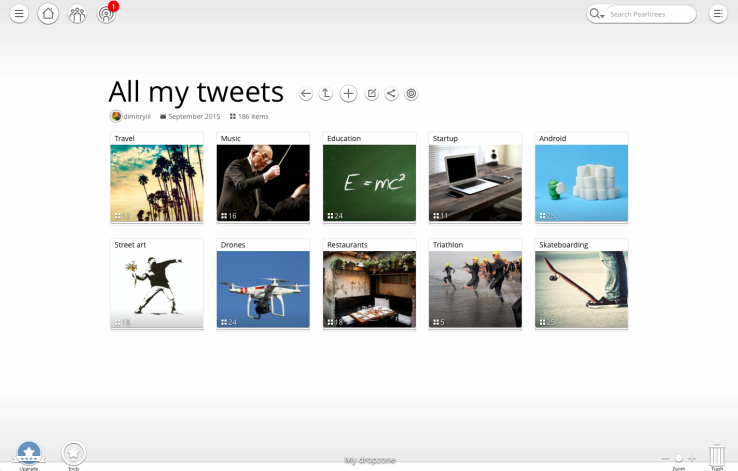 In 2009, Pearltrees started out as a bookmarking service with a quirky interface. Since then, the service has added a number of new curation features like support for uploading files, taking notes and managing your photos.

Today the company is announcing a major new feature with the launch of its Smartcloud service. The idea here is to allow Pearltrees to automatically import and organize your tweets and Facebook posts (as well as files stored in Dropbox and Google Drive). Having a backup service for your social media posts isn’t all that exciting and novel, but Smartcloud takes this data and then automatically organizes it by topic.

To power the algorithms behind this service, Pearltrees relies on the data it can extract from the tens of millions of bookmarks and files its users have already organized (and in addition, Pearltrees can extract semantic data from most sites).

As the Pearltrees team told me, it developed all the technology behind this feature in-house. “We use machine learning algorithms to understand the way a typical user organizes items, so we are able to infer the way he or she would have organized yours,” a company spokesperson told me. “We are not only able to group items and put them into collections and sub-collections, but also to give an accurate name to those collections. As far as we know, the latter is a pretty unique piece of technology.”

In my test, the feature actually worked surprisingly well. I imported all the links from my recent tweets and the service neatly organized them into groups related to Google, Microsoft, big data, acquisitions, drones and other things I tend to tweet about. Having this structure makes it easier to go back to links you know you once tweeted but can’t find again. To me, that’s probably the main utility of this service.

Pearltrees also pulls in your images from Twitter and Facebook, but it doesn’t classify them automatically, so that part of the service didn’t strike me as all that interesting, but there are surely quite a few users who want to keep a backup of the images they share on Twitter and Facebook on a third-party service.

The new Smartcloud tool is now available on the web and should find its way into Pearltrees’ Android and iOS apps within the next couple of days.