Redbox To Kill Off Its Streaming Service Next Week 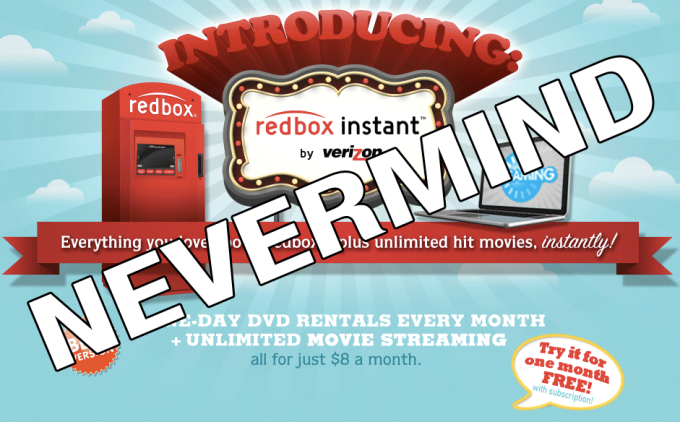 18 months after opening its doors to the public, Redbox Instant (the online streaming arm of those Redbox kiosks you see in grocery stores around the country) is shutting down. The service will officially hit the lights and kill the servers on October 7th.

News of the shutdown comes by way of a notice posted on the service’s front page:

Thank you for being a part of Redbox Instant by Verizon. Please be aware that the service will be shut down on Tuesday, October 7, 2014, at 11:59 p.m. Pacific Time.

Information on applicable refunds will be emailed to current customers and posted here on October 10.

In the meantime, you may continue to stream movies and use your Redbox kiosk credits until Tuesday, October 7 at 11:59 p.m. Pacific Time.

We apologize for any inconvenience and we thank you for the opportunity to entertain you.

The idea behind Redbox Instant wasn’t a terrible one: for $6 a month, you got access to their online streaming catalog and four DVDs a month from their physical kiosks. In theory, this allowed customers to access newer movies than streaming alone would allow.

Alas, it really just never caught on. While Netflix’s catalog may have some gaps, Redbox’s paled in comparison. As GigaOm points out, the company’s execs publicly admitted to being disappointed by the subscription numbers back in August.

Add in the fact that Redbox has been unable to sign up new customers for months due to suspicions that credit card thieves were using the sign-up system to test stolen cards, and the whole thing sort of just fell apart.

I used the service for about a week during a free trial, but found myself back on Netflix before the week was out. Will anyone out there miss this one?