Spam from an anti-virus company claiming to be a security patch? It’s Zbot/Zeus malware.

SophosLabs alerted us earlier today to a spam campaign that seemed to originate from a whole raft of different security and anti-virus companies.

The messages have a variety of subject lines, such as:

The emails are all very similar, claiming to include an important security update to deal with “the new malware circulating over the net”.

The parts shown in pink above vary from email to email, but the bulk of the content stays the same: 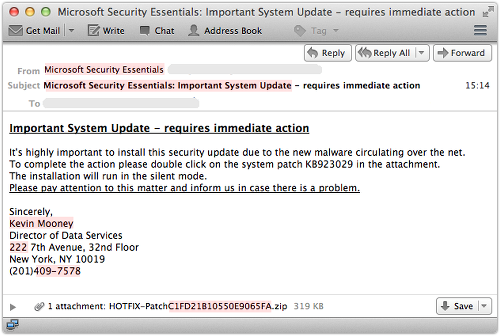 It’s highly important to install this security update due to the new malware circulating over the net. To complete the action please double click on the system patch KB923029 in the attachment. The installation will run in the silent mode. Please pay attention to this matter and inform us in case there is a problem.

The email doesn’t explicitly mention the CryptoLocker ransomware that locks your files and tries to sell them back you.

But there is little doubt that many recipients, having heard of the ongoing saga of CryptoLocker, will be more inclined than usual to read on.

It’s all a pack of lies, of course.

There is no “system patch KB923029,” and even if there were, neither Microsoft nor any other reputable company would send out security updates as email attachments.

Also, if you are a native speaker of English, you should spot a number of niggling errors of usage and grammar in the text of the email.

→ The fact that an email is grammatically flawless, in English or any other language, is not an indicator of legitimacy. But language blunders in English, in an email purporting to come from the New York office of a legitimate software company, are a strong indicator of bogosity. If the crooks can’t even be both to trying rite and spel decent, you may as well use their linguistic sloppiness against them.

The ZIP file contains an EXE (a program file); that program file is one of the many variants of the Zbot malware, also known as Zeus, that we see on a regular basis.

You’re expected to open the ZIP and run the program inside, which has a name like this:

There’s nothing wrong with having an EXE inside a ZIP file.

But a ZIP that contains only an EXE, and that was delivered by email, is just as suspicious as a plain EXE that arrives as an attachment.

If you do run it, the EXE installs itself into:

with a random filename, and adds itself to the registry key:

so that it gets launched every time you reboot or logon.

We shouldn’t need to remind you, but we’ll do so in case you want to remind someone else: