Tesla has announced that it had come to an agreement to acquire SolarCity in a $2.6 billion all stock transaction. Tesla first announced it was interested in acquiring the solar power company back in June.

In the wake of the announcement, both Tesla and SolarCity stock is being traded down. The original anticipated range for the sale was $26.50 to $28.50 per share. Rather, the deal will be moving forward at $25.37 per share. This is a loss of over $200 million dollars in SolarCity value over the last month based on shares of the company outstanding. 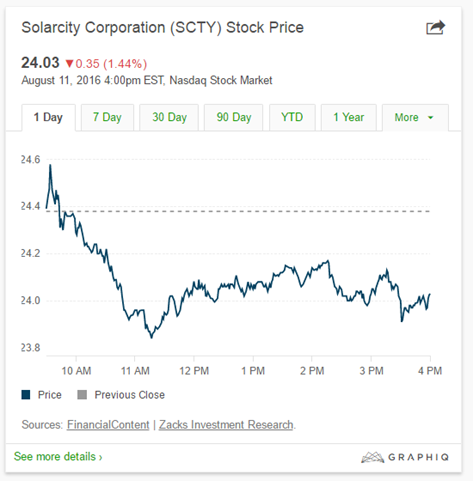 When the announcement was first made back in June, Tesla stock tumbled while SolarCity was bid up. Unfortunately for SolarCity, investors didn’t get the same treatment this time. SolarCity lowered its guidance in sync with the announcement this morning, blaming lower than expected demand for its solar technology.

Both Tesla and SolarCity filed Form 8-K’s notifying investors the companies had reached an agreement. SolarCity shareholders will receive 0.110 common shares per SolarCity share rather than the originally proposed 0.122 to 0.131. Members of both boards, including Musk, have recused themselves from voting on the transaction because of conflicts of interest.

Tesla expects the transaction to produce $150 million in cost synergies in the year after the deal closes. The company wants to kick-back some of these synergies to consumers and make clean energy more accessible. Many of the synergies are textbook: combined customers and streamlined marketing. However, because Tesla has a retail network of its own, it will be able to sell direct-to-consumer right from its stores at the time a car is purchased.

To create a truly vertically integrated energy company, Musk needs to own both power generation and the storage of energy produced. In time for its acquisition of SolarCity, Tesla opened its $5 billion Gigafactory earlier this week. At full efficiency, the factory will reduce lithium ion battery costs by 30 percent by 2020. To charge all these batteries, Tesla needs to get inside the solar market lickety–split if it wants full control of the space.

To realize the full value that this acquisition could bring to Tesla shareholders, it is important to view the transaction in the context of Tesla’s future plans. Musk wants to push Tesla farther into the commercial space with electric solutions for public mass transit and cargo transport. Battery technology will not be limited to Powerwall and Powerpack in the future.

To put Tesla’s hunger for batteries in perspective, the average car today can attain 25 miles-per-gallon while a semi in gasoline equivalent comes out around 5 miles-per-gallon. This presents both an engineering and economic challenge. Not only would Tesla need to supply enough batteries to close the gap, it would need to simultaneously reduce vehicle charging downtime while increasing battery output. Every minute spent charging extends delivery times. Every battery in a trailer results in fewer goods being transported.

Tesla has its work cut out for it over the next decade. Investors are angsty about the acquisition because it means more uncertainty. Musk’s mission depends on success in not one but many areas of research and development. Autonomous driving technology could remove the driver all together opening up cab space for batteries. Reductions in the cost of batteries could open up Tesla’s technology to emerging markets.

If Musk can catch the clean energy conversion at just the right time, Tesla will make a fortune that will bankroll other projects. Unfortunately, Breakout Labs isn’t funding Tesla right now and technical execution risk will reduce the value of Tesla in the short term on public markets.

The transaction is expected to close in Q4 2016 after shareholders vote at their respective meetings.