Slick, sleek, and fast and very Windows-like … this is a distro that could get your users on the path of OS righteousness.

Did you know that hippos are one of the most dangerous animals in the world? They can run at up to 20 miles per hour and more people are killed by hippos every year than are killed by lions and tigers combined.

As it happens, the hippo is also the mascot of one of the most impressive end user-oriented Linux distributions available,MakuluLinux, which is also interesting for another reason, it’s a realistic path for migrating Linux users to Windows.

The problem for many users is that most Linux distros pose a steep learning curve simply because they’re habituated to the way Windows looks and feels and most distros don’t look or feel anything like Windows. If this is the kind of problem you face then there’s a variant of MakuluLinux that might make your users’ transition much easier: MakuluLinux Aero. 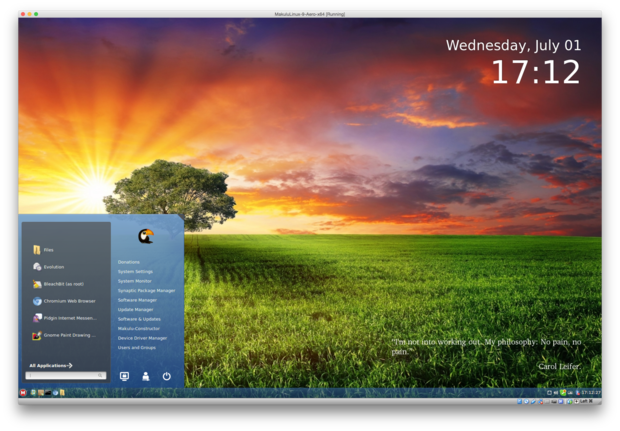 Created in South Africa, MakuluLinux (“Makulu” is the Zulu word for “big chief”) is both Ubuntu- and Debian-based. The distro runs on a PAE kernel and, according to the distro’s creator, Jacque Montague Raymer, “provides a Sleek, Smooth and Stable user experience that is able to run on any computer from old to new, from netbooks to notebooks, desktops to server stations” and he isn’t kidding; MakuluLinux is slick and sleek and supports KDE, Unity, Xfce, LXFCE (an interesting mashup by MakuluLinux author of LXDE, Xfce, and Compiz, with Emerald themes), and Cinnamon desktop environments.

Based on the Cinnamon desktop environment, MakuluLinux Aero requires a 64-bit platform and its features include: