Twitter is taking people’s favourites and injecting them into others’ newsfeeds as if they were retweets.

The move is causing harrumphing among people who mistakenly thought their favourites were private.

The thing is, we never could have lurked in private, favouriting tweets from our super-secret hidden bat caves.

That’s because the information’s readily available.

Still, some Twitter users seem to prefer having at least what they think of as “semi-private” favs – as in, private if you assume that others don’t know/care enough to click on a page to see what Twitterishly turns you on. 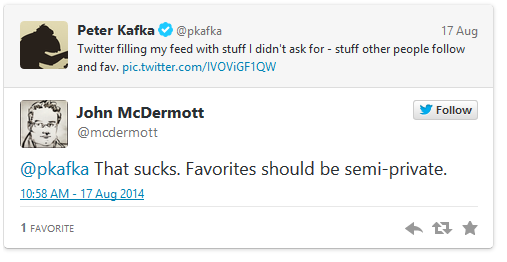 @pkafka That sucks. Favorites should be semi-private.

The Next Web’s Jon Russell reports that he first got wind of the RT-ification of favourites on 4 August. 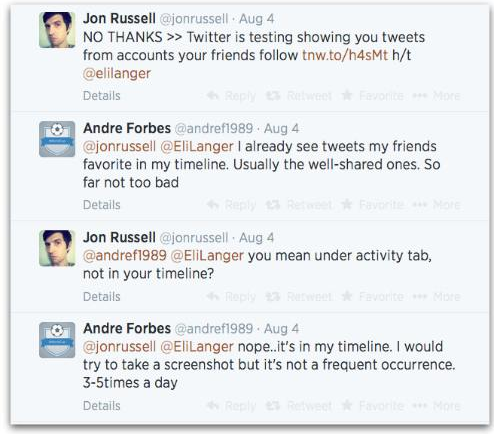 Since then, users report that Twitter has increased the volume of your favourites that it shows to your friends. As well, people are being notified when others follow someone new.

I reached out to Twitter to ask for the rationale behind what might just be an experiment and for any other details it might want to share. I’ll update the article if I hear back.

But given that it’s a service that runs on advertising revenue, one might assume that the newsfeed tweaks are yet more sticks to poke at that honey hole.

Take care that you don’t dilute that by unleashing algorithms and experiments that pollute newsfeeds.

Stuffing people’s newsfeeds with content they didn’t ask for is a sure way to convince people you’re getting Facebook-y.