To subscribe for the service, users simply download the Visible app (currently available only on iOS) and register. Right now, subscriptions are invitation only and would-be subscribers have to get an invitation from someone who’s already a current Visible member.

Once registration is complete, Visible will send a sim card the next day, and, once installed, a user can access Verizon’s 4G LTE network to stream videos, send texts, and make calls as much as their heart desires.

Visible says there’s no throttling at the end of the month and subscribers can pay using internet-based payment services like PayPal and Venmo (which is owned by PayPal).

The service is only available on unlocked devices — and right now, pretty much only to iPhone users. 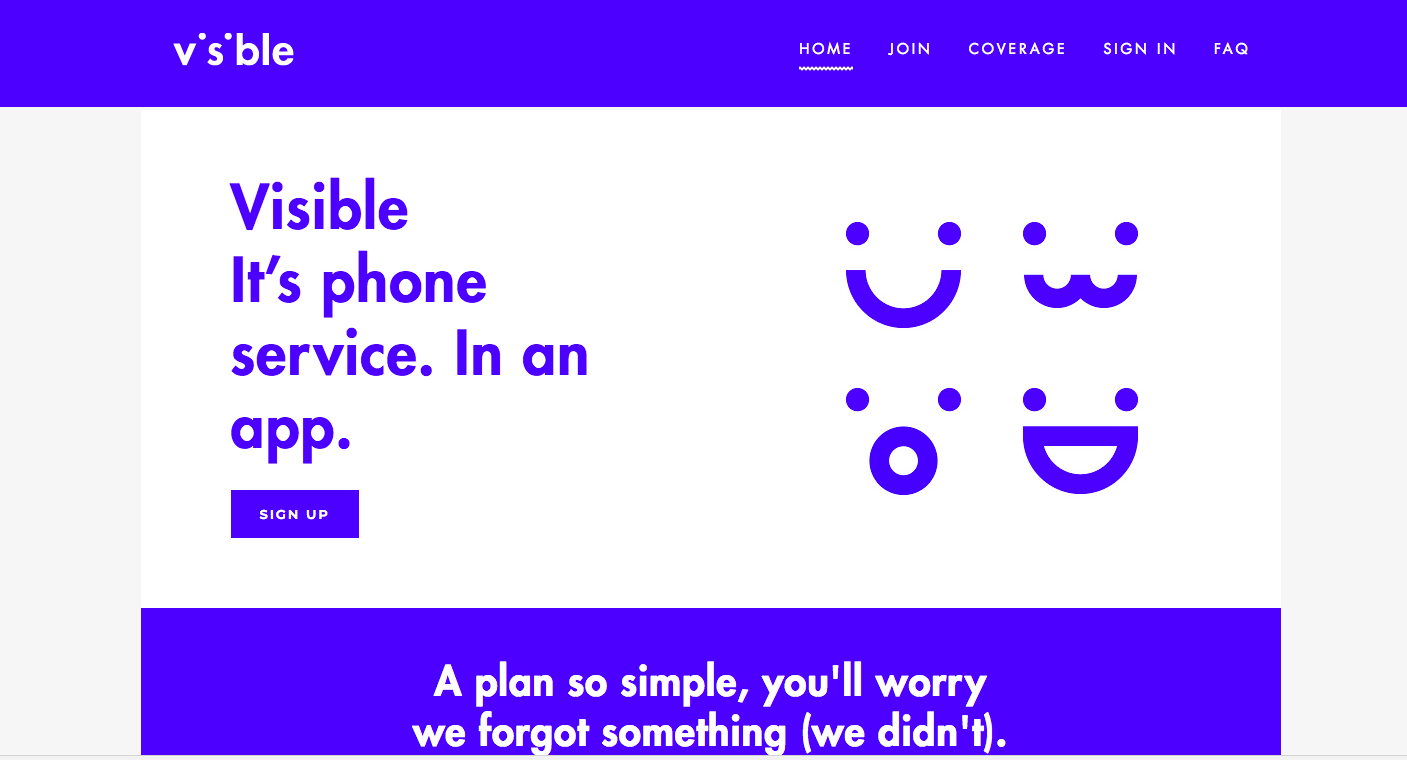 The company wouldn’t say how much Verizon gave to the business to get it off the ground, but the leadership team is comprised mostly of former employees, like Miguel Quiroga the company’s chief executive.

“The way I would think about it.. we are a phone service in the platform that enables everything that you do. The way we launched and the app messaging piece of it. You do everything else on your phone and a lot of time if you ask people your phone is your life,” said Ormes. The thinking was, “let’s give you a phone that you can activate right from your phone and get ready to go and see how it resonates.”

It’s an interesting move from our corporate overlord (Verizon owns Oath, which owns TechCrunch), which is already the top dog in wireless services, with some 150 million subscribers compared with AT&T’s 141.6 million and a soon-to-be-combined Sprint and T-Mobile subscriber base of 126.2 million.

For Verizon, the new company is likely about holding off attrition. The company shed 24,000 postpaid phone connections in the last quarter, according to The Wall Street Journal, which put some pressure on its customer base (but not really all that much).

Mobile telecommunications remain at the core of Verizon’s business plans for the future, even as other carriers like AT&T look to dive deeper into content (while Go90 has been a flop, Verizon hasn’t given up on content plans entirely). The acquisition of Oath added about $1.2 billion in brand revenue (?) to Verizon for the last quarter, but it’s not anywhere near the kind of media juggernaut that AT&T would get through the TimeWarner acquisition.

Verizon seems to be looking to its other mobile services, through connected devices, industrial equipment, autonomous vehicles, and the development of its 5G network for future growth.

Every wireless carrier is pushing hard to develop 5G technologies, which should see nationwide rollout by the end of this year. Verizon recently completed its 11 city trial-run and is banking on expansion of the network’s capabilities to drive new services.

As the Motely Fool noted, all of this comes as Verizon adds new networking capabilities for industrial and commercial applications through its Verizon Connect division — formed in part from the $2.4 billion acquisition of Fleetmatics, that Verizon bought in 2016 along with Telogis, Sensity Systems, and LQD Wifi to beef up its mobile device connectivity services.

Founded by the team that created the media site Elite Daily, Wing uses Sprint cell-phone towers to deliver its service.

David Arabov and co-founder Jonathan Francis didn’t take long after taking a $26 million payout for their previous business before getting right back into the startup fray. Unlike Visible, Wing isn’t a one-size-fits-all plan and it’s a much more traditional MVNO. The company has a range of plans starting at $17 for a flip-phone and increasing to an unlimited plan at $27 per month, according to the company’s website.

As carriers continue to face complaints over service fees, locked in contracts, and terrible options, new options are bound to emerge. In this instance, it looks like Verizon is trying to make itself into one of those carriers.