Walmart Doubles Down On Online Grocery Shopping With Curbside Pickup 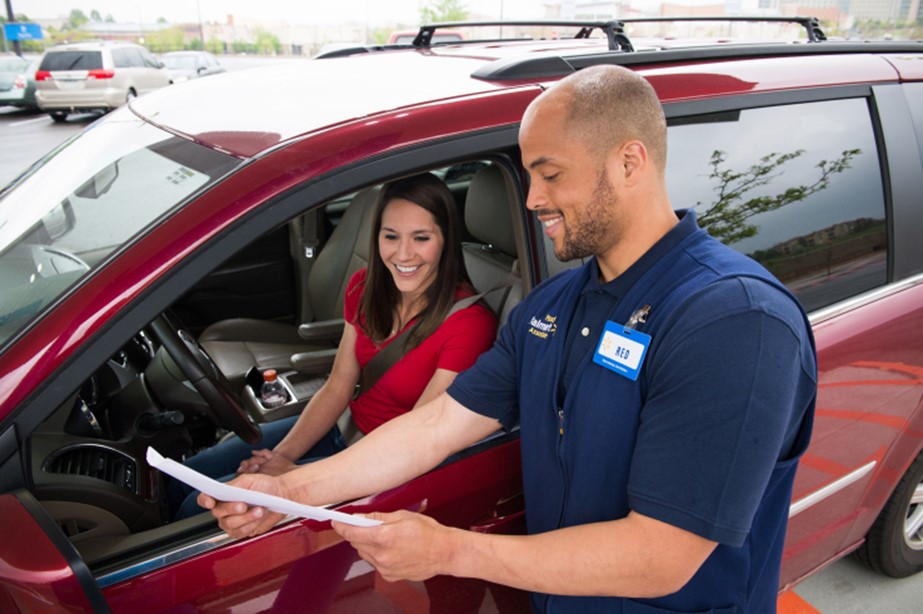 Walmart today is announcing an expansion of its online grocery shopping service with launches in eight additional markets, as well as plans for a continued rollout to several more regions in the months ahead. The news comes at a time when a number of startups and larger companies, including Amazon, are vying to become consumers’ preferred online grocery delivery service.

Meanwhile, Walmart has largely been pursuing a different strategy with prior tests of online grocery shopping combined with a local pickup option at a small handful of stores around the U.S.

Walmart believes that its competitive advantage in the online grocery shopping space comes from the retailer’s sizable brick-and-mortar footprint here in the U.S. where seventy percent of the population lives within 5 miles of a Walmart store.

In addition, by choosing to focus on local pickup instead of delivery, there’s a cost savings for consumers. That’s because some delivery services generate revenue by either marking up the price of items being delivered, or they charge a delivery fee, and they tend to require a yearly subscription fee, as well. 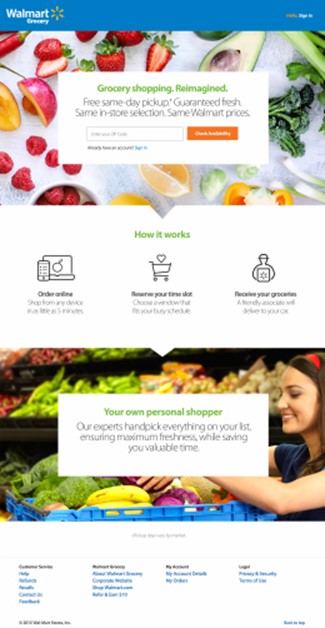 For example, Amazon has been testing AmazonFresh grocery delivery in Seattle, New York (Brooklyn), Philadelphia, plus Northern and Southern California. But Amazon’s service will have a $299 annual fee, though the deadline to subscribe has been pushed back repeatedly (which may indicate pricing could be a concern). At the same time, Amazon has muddied the waters by expanding its grocery delivery options though its one-hour delivery service Prime Now – including in some of the same markets where AmazonFresh is live.

Walmart, on the other hand, has been testing both online grocery delivery and local pickup at a number of stores. It tried delivery in Denver and San Jose, but has seemed to favor local pickup as that service has been the one to expand over the course of 2015.

Over A Dozen Markets Now Live

As of now, Walmart is announcing a slew of new markets are going live with online grocery shopping. These include: Atlanta, Georgia; Charlotte and Fayetteville, N.C.; Salt Lake City and Ogden, Utah; Nashville, Tennessee; Tucson, Arizona; and Colorado Springs, Colorado. Customers in these regions can begin filling their online carts today, but pickup itself begins October 13.

In addition, the retailer says the plan is to roll out online grocery shopping to even more stores and regions in the weeks ahead, but is not sharing details. 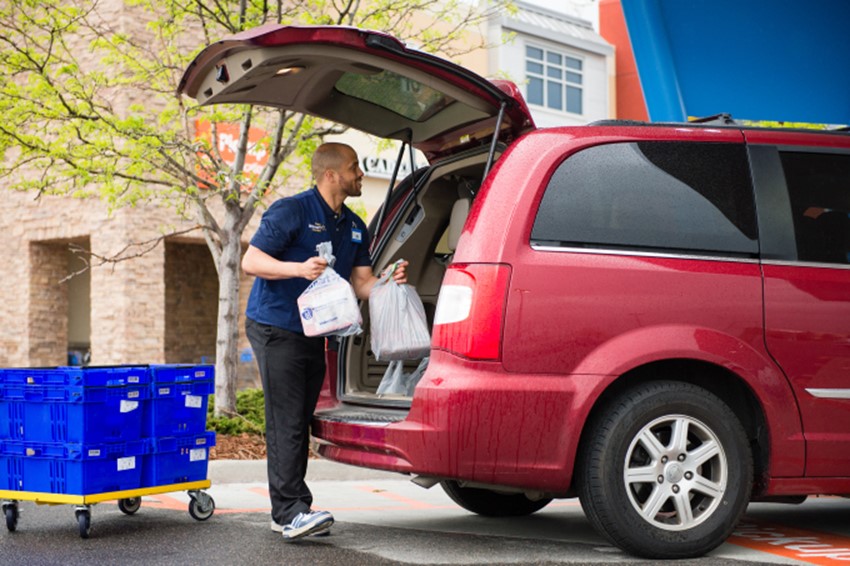 The choice of cities is somewhat interesting, too. (Ogden?!) While grocery delivery competitors often focus on denser, urban markets, Walmart is choosing good-sized cities, some with millions of households, but also those that are being passed over by grocery delivery providers. That speaks to there being something more of a “secret sauce” that Walmart is looking for in terms of its customer demographics.

On that front, it seems important to point out that the new service is seeing more women than men shopping for groceries online, as well as a mix of loyal Walmart shoppers combined with new customers.

“The majority of what we see coming and the focus of the Walmart customer base is largely women – that’s what we have a lot of. We see a lot of women with kids in car seats, who are moving from place to place throughout the day,” explains Michael Bender, EVP and COO, Walmart Global e-commerce.

The way the grocery shopping service works involves a combination of online and offline interactions between the customer and the retailer. Customers shop online via the Walmart website, adding items to their cart – which they can even save throughout the week as they build their order if they choose.

There are around 30,000 SKUs available, which is comparable to what you’d find in the store. The majority are grocery items, though there is also a limited selection of general merchandise available, too. The prices are the same as they are in the store, and there’s no fee for using the service. However, unlike when you shop in store, coupons are not accepted. 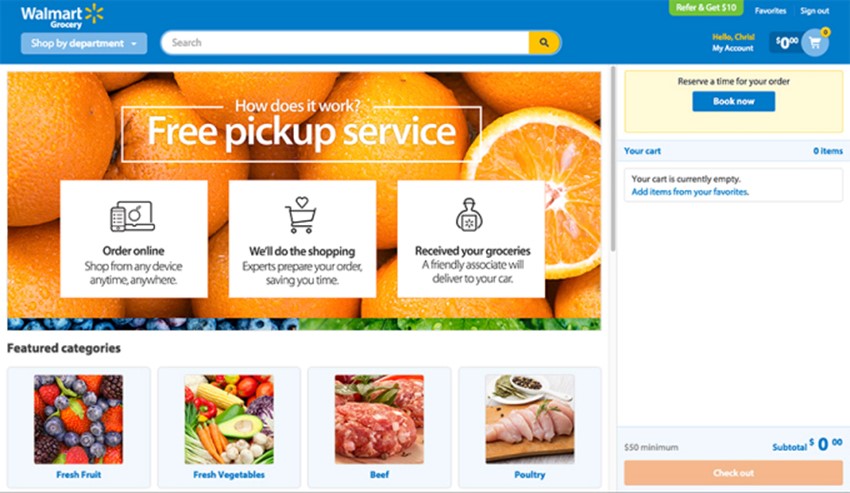 When the order is complete, the customer pays online, then sets their pickup time frame. When that time arrives, they drive to their local Walmart store and park in a designated space reserved for online grocery shoppers located either in the front or side of the store. After parking, they call the store at a number provided both via their original confirmation email, and again through a reminder call a few minutes ahead of their pickup time.

A store associate will then bring out a cart filled with their groceries, including the fresh and frozen items which had been picked and stored separately in coolers and freezers in the back of the store in advance of the customer’s arrival. 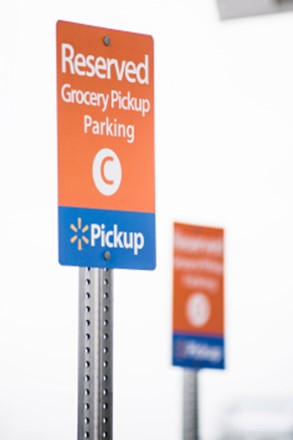 Bender confirms that the retailer is increasing headcount by hiring full-time “personal shoppers” who handle picking the customers’ orders. Over time, the technology will become more personalized to each customer, he says, by allowing grocery shoppers to make specific requests – like asking for a particular ripeness to a fruit, for example.
The exec also notes that with each subsequent launch of online grocery shopping, customer adoption has accelerated faster than in the previous market, indicating growing consumer interest in this service. However, the retailer declined to talk about adoption numbers, transaction volume or other specific metrics.

The strategy of focusing on pickups is not unique to Walmart, but something many brick-and-mortar retailers are considering in order to compete with the growing number of delivery services. For example, Target and Best Buy are testing local pickup in partnership with Curbside. Meanwhile, a number major U.S. retailers have offered in-store pickup and ship-to-store programs for years.

Given that it’s still early days for online grocery shopping here in the U.S., it’s unclear which type of service – delivery or pickup – American consumers will gravitate toward in the months ahead. But Walmart’s strategy has always been about offering hybrid e-commerce experience where the digital and physical converge.

“This is one of the more visible manifestations of that goal we have as a company,” says Bender. “We think we’re positioned well to be a significant player in the [online grocery shopping space] going forward,” he adds.