What’s the difference between a vulnerability scan, penetration test and a risk analysis?

Misunderstanding these important tools can put your company at risk – and cost you a lot of money.

You’ve just deployed an ecommerce site for your small business or developed the next hot iPhone MMORGP. Now what?

An often overlooked, but very important process in the development of any Internet-facing service is testing it for vulnerabilities, knowing if those vulnerabilities are actually exploitable in your particular environment and, lastly, knowing what the risks of those vulnerabilities are to your firm or product launch. These three different processes are known as a vulnerability assessment, penetration test and a risk analysis. Knowing the difference is critical when hiring an outside firm to test the security of your infrastructure or a particular component of your network.

Let’s examine the differences in depth and see how they complement each other. 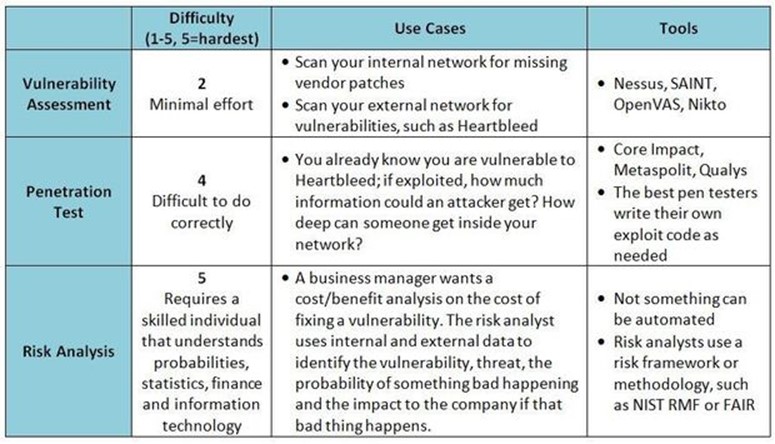 Vulnerability assessments are most often confused with penetration tests and often used interchangeably, but they are worlds apart.

Vulnerability assessments are performed by using an off-the-shelf software package, such as Nessus or OpenVas to scan an IP address or range of IP addresses for known vulnerabilities. For example, the software has signatures for the Heartbleed bug or missing Apache web server patches and will alert if found. The software then produces a report that lists out found vulnerabilities and (depending on the software and options selected) will give an indication of the severity of the vulnerability and basic remediation steps.

For example, let’s say a website is vulnerable to Heartbleed as many websites still are or your datacenter to ‘Venom’. It’s one thing to run a scan and say “you are vulnerable to Heartbleed” and a completely different thing to exploit the bug and discover the depth of the problem and find out exactly what type of information could be revealed if it was exploited. This is the main difference – the website or service is actually being penetrated, just like a hacker would do.

Similar to a vulnerability scan, the results are usually ranked by severity and exploitability with remediation steps provided.

Penetration tests can be performed using automated tools, such as Metasploit, but veteran testers will write their own exploits from scratch.

A risk analysis is often confused with the previous two terms, but it is also a very different animal. A risk analysis doesn’t require any scanning tools or applications – it’s a discipline that analyzes a specific vulnerability (such as a line item from a penetration test) and attempts to ascertain the risk – including financial, reputational, business continuity, regulatory and others –  to the company if the vulnerability were to be exploited.

Many factors are considered when performing a risk analysis: asset, vulnerability, threat and impact to the company. An example of this would be an analyst trying to find the risk to the company of a server that is vulnerable to Heartbleed.

The analyst would first look at the vulnerable server, where it is on the network infrastructure and the type of data it stores. A server sitting on an internal network without outside connectivity, storing no data but vulnerable to Heartbleed has a much different risk posture than a customer-facing web server that stores credit card data and is also vulnerable to Heartbleed. A vulnerability scan does not make these distinctions. Next, the analyst examines threats that are likely to exploit the vulnerability, such as organized crime or insiders, and builds a profile of capabilities, motivations and objectives. Last, the impact to the company is ascertained – specifically, what bad thing would happen to the firm if an organized crime ring exploited Heartbleed and acquired cardholder data?

The three different concepts explained here are not exclusive of each other, but rather complement each other. In many information security programs, vulnerability assessments are the first step – they are used to perform wide sweeps of a network to find missing patches or misconfigured software. From there, one can either perform a penetration test to see how exploitable the vulnerability is or a risk analysis to ascertain the cost/benefit of fixing the vulnerability. Of course, you don’t need either to perform a risk analysis. Risk can be determined anywhere a threat and an asset is present. It can be data center in a hurricane zone or confidential papers sitting in a wastebasket.

It’s important to know the difference – each are significant in their own way and have vastly different purposes and outcomes. Make sure any company you hire to perform these services also knows the difference.