Where Police Can & Can’t Snoop Through Your Phone

A privacy issue has been brewing in the U.S. for years now: if the police arrest you, should they be able to snoop through your iPhone like a jealous lover? Judges across the country have come to different conclusions as to whether a search of a phone without a warrant is an unreasonable one, setting up a legal disagreement that will likely need to be settled by the Supreme Court. (Update 8/19/13: They’ve been officially asked to do so.) For now, the differing decisions mean that the privacy of the photos, texts, emails, contacts, call logs, and ‘Bang With Friends’ app on your phone of choice varies from state to state.

Hanni Fakhoury, a lawyer at the Electronic Frontier Foundation, has compiled a rough guide of where warrantless cell phone searches are allowed and not allowed when arresting someone based on rulings in state and federal courts “that have looked at the legal issue head on.” FORBES has turned that into the map below. Red states are those where your phone can be searched when you’re arrested. Blue states are those where police need to get a warrant to take a look inside those information-rich devices. Yellow states have no precedent set yet. 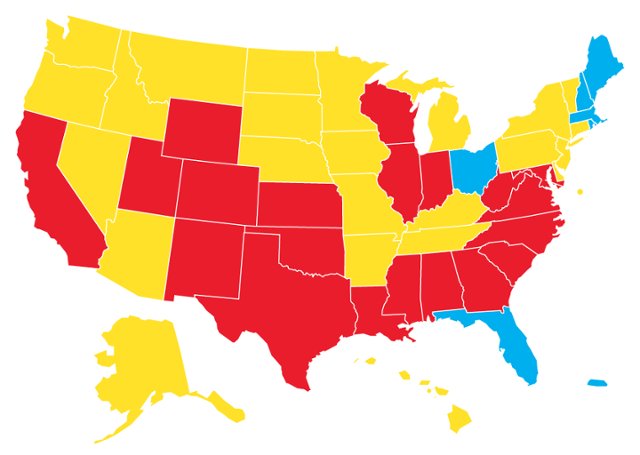 If you want a map that will take you to a court decision that helped determine the state’s color go to original article here.

“Cellphones are a potential treasure trove for law enforcement officers seeking evidence of a crime. When a person is arrested with a cellphone on him, law enforcement officers will likely want to search the phone’s contents,” wrote Bridget Rohde in a Law360 article earlier this year on the lack of a clear rule on this around the country. A precedent-setting case in 1973 involving drugs found in a cigarette carton in someone’s pocket established that the po-po can search “containers” people have on them when arrested. Where courts have disagreed is whether the information held in a phone is so vast that it should be treated differently. Unlike a cigarette carton, looking through a phone is as intimate as searching a person’s house as today’s mobile devices contain schedules, contacts, history of communication, private correspondence, financial apps, medical apps, time-wasting games, and inevitably, some racy photos. Having the right to look through phones means police could take a suspect into custody for the chance to search the many planets of intel in a Samsung Galaxy for evidence, or could wind up stumbling upon something incriminating on a Droid while arresting its owner for being at a protest or rally.

Most of the blue parts of the map only recently became that way thanks to decisions this year in Florida and in the First Circuit. The Florida case involved Cedric Smallwood, a man suspected of robbing a convenience store in Jacksonville of about $15,000 in 2008. After Smallwood was identified by witnesses, police got a warrant to arrest him. They seized his phone, and while scrolling through it found photos that made a perfect (and romantic) infographic for the crime: a photo of a handgun taken before the robbery, a photo of Smallwood’s girlfriend holding a bundle of money the day after the robbery, a photo of a handgun next to a fanned-out stack of cash four days after the robbery, and an image of hands with engagement rings five days after the robbery. In other words, the cellphone search made the prosecution’s job a whole lot easier.

Smallwood challenged the search of his cellphone on appeal saying police should have gotten a warrant to look through it first. Florida’s Supreme Court agreed with him. “We refuse to authorize government intrusion into the most private and personal details of an arrestee’s life without a search warrant simply because the cellular phone device which stores that information is small enough to be carried on one’s person,” wrote the Florida judges in May. A Florida sheriff’s office says they are now writing warrants that include the right to search phones, but this protects someone who might be ‘casually arrested,’ say for being at a protest.

The same month, the federal court for the First Circuit reached the same conclusion in U.S. v. Wurie, saying the police shouldn’t have searched a Boston man’s phone without a warrant after they saw him engaged in a drug sale in a car.

“The storage capacity of today’s cell phones is immense…. That information is, by and large, of a highly personal nature: photographs, videos, written and audio messages (text, email, and voicemail), contacts, calendar appointments, web search and browsing history, purchases, and financial and medical records,'” wrote the First Circuit judges in their ruling, which put northeast states into the blue. “It is the kind of information one would previously have stored in one’s home and that would have been off-limits to officers performing a search incident to arrest.”

“The First Circuit and Florida Supreme Court issued their decisions  weeks apart from each other earlier this year meaning that for a while prohibiting cell phone searches incident to arrest was clearly the minority position,” says EFF’s Fakhoury. “There’s greater momentum now.”

Back in 2011, after California’s Supreme Court ruled that it was okay to look through people’s phones when you arrested them, the legislature tried to pass a law to protect phones, but the governor vetoed it. There are no other states with laws on the books about the practice. Now that federal courts have disagreed on the question, it sets the stage for a showdown at the nation’s highest court. The First Circuit declined to revisit its Wurie decision this week with its chief judge writing that he hopes it will “speed this case to the Supreme Court.”