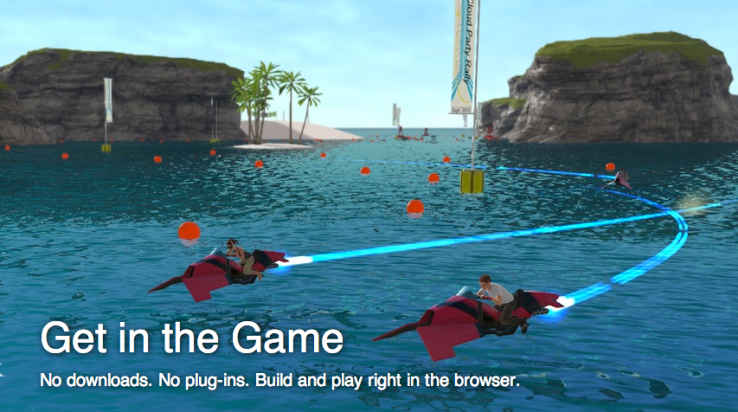 Yahoo is doing more than just throwing shade at Google on Twitter today and then taking it back – the company has acquired Cloud Party, a browser-based game creation engine. In a blog post, the Cloud Party team shared that they will be joining Yahoo after two years of operation, and that the service will shut down on February 21, 2014.

Cloud Party is the work of a founding team of MMO and console game industry vets, including Sam Thompson (formerly of Cryptic and Pandemic), Jimb Esser (also ex-Cryptic), Conor Dickinson (ex-Facebook, Tomb Raider dev and Cryptic alum) and Jered Windsheimer (Cryptic, natch). They built Cloud Party as a sort of free-form virtual world experience, similar to Second Life, but with an updated view of what an online virtual world might look like with more emphasis on user-generated 3D content.

It’s not exactly clear what the team will be working on at Yahoo, but it will definitely be games related, as Thompson notes in his farewell blog post that the Cloud Party squad is “excited to bring [its] vision and experience to a team that is as passionate about games as [they] are.”

Of course, Yahoo has a games portal of its own, but nothing quite so ambitious as a browser-based virtual world. Perhaps it’s thinking about doing something in that direction, but it’s more likely this was a small acquisition designed to bring some strong video game engineering (Cloud Party works in the browser with no plugins necessary) on board, with the ultimate aim of using that talent to fuel Yahoo’s own separate ends.

If you happen to be an existing Cloud Party user, there’s a guide provided by the startup to help you export your data. Yahoo continues its habit of picking up small startups with unique and divergent skill sets, but only time will tell if these are merely an engineering talent grab to help shore up some of Yahoo’s talent losses to more appealing firms over the past few years, or whether some of these things result in new product launches for the big purple exclamation mark.

It’s also worth noting that Yahoo acquired a gaming infrastructure startup back in May of last year. PlayerScale, the company in question, builds the bones for cross-platform gaming, and supported over 150 million players worldwide at the time of acquisition. The platform continues to operate, and is slated for updates and improvements with the help of Yahoo’s backing, according to PlayerScale’s founder Jesper Jensen. Together, PlayerScale’s backend and Cloud Party’s everything else could make for some very interesting games-related development coming out of Yahoo.

When contacted for comment, a Yahoo spokesperson provided the following statement to TechCrunch:

Yahoo has acquired Cloud Party, a company that has created a virtual 3D experience, directly in users’ browser. With Cloud Party, users can build and create a world, customize an avatar, and share easily on the web without any downloads or plug-ins. The Cloud Party team is extremely committed to user experience and to the creativity that their product released in people. We’re excited to merge their unique perspective and experience with a team that is just as passionate about gaming.