Yahoo Mail rolls out a rebuilt, redesigned service, including a new ad-free option

Following its Verizon acquisition, Yahoo today is rolling out a revamped and rebuilt Mail application for its 225 million monthly active users. The update includes a new design, feature set, and technology stack, as well as a new subscription plan for desktop and mobile called Yahoo Mail Pro.

The news is part of several changes ahead for Yahoo, under its new corporate parent  – Oath, the combination of Yahoo and AOL (which also owns TechCrunch) – all of which are now operated by Verizon. For example, earlier this week, Yahoo was found to be exiting a prior deal with AT&T, which had allowed customers with AT&T email addresses to log into Yahoo websites.

However, despite Yahoo Mail’s technology overhaul and redesign – which does present a nicer-looking, better-functioning version of the product than we’ve seen in the past – it may be difficult for Yahoo to attract new users to its email service. The company was famously plagued by two massive security breaches affecting more than a billion users, which ended up knocking $350 million off the asking price for the Verizon/Yahoo deal that closed in Junefor $4.5 billion.

Simply put, email is a product where users conduct their lives, businesses, and share personal and private information. Yahoo’s history doesn’t inspire trust, given its data breaches were some of the largest in internet history. That’s unfortunate, in a way, because Google deserves to have real competition for its dominating Gmail service, which crossed the 1 billion monthly active user mark last year.

There are three main parts to the Yahoo Mail revamp, beginning with a rebuilt front-end tech stack, that now leverages open source technologies like React, Redux, Node.js, react-intl, and others. The goal, here, is to be able to deliver a Yahoo Mail service that’s faster to launch, and generally better for low-bandwidth and international users, in particular.

Yahoo says its optimizations have been able to reduce its JavaScript and CSS footprint by 50 percent, compared with the earlier desktop product, which means the app will launch much faster. Search and reading messages is also faster, as a result.

In addition, the new product reduces the memory used by the browser, is more reliable, more accessible, and is built in a way that will allow its developers to be more agile in terms of updates and other pushes.

For Yahoo Mail users, however, these changes will be under-the-hood, and not necessarily noticed beyond an overall sense that the app seems quicker. More obvious will be the redesign and new feature set.

The updated look of Yahoo Mail is one of a much cleaner, more modern app. It looks like something built in 2017 instead of old, legacy product that kept getting painted over throughout the years. It also reminds us a bit of Microsoft’s Outlook.com in terms of its interface, rather than Gmail’s highly functional, but not so pretty, inbox.

And here’s the new one:

Items in the new inbox have more spacing in between them, which makes it feel less cluttered, but is not ideal for those who receive a large number of emails.

The app can now be personalized with new colorful themes, introduces stationary, and email writers can use the emoji set that Twitter open sourced in their messages.

Yahoo has also taken inspiration from a number of newer email apps to make it easier for users to find certain kinds of messages. On the left-side navigation, Yahoo Mail will offer links to automatically created folders that collect your Photos and your Documents, for quick access.

There are other little tweaks as well, such as rich previews that let you hover over attachments to see what they contain; a Search mode that reflects your personalized settings for how you prefer to view your emails; a redesigned settings screen where your changes instantly update the app; and accessibility improvements, including support for NVDA and VoiceOver screen readers, as well as options for light-sensitive and low-vision readers. 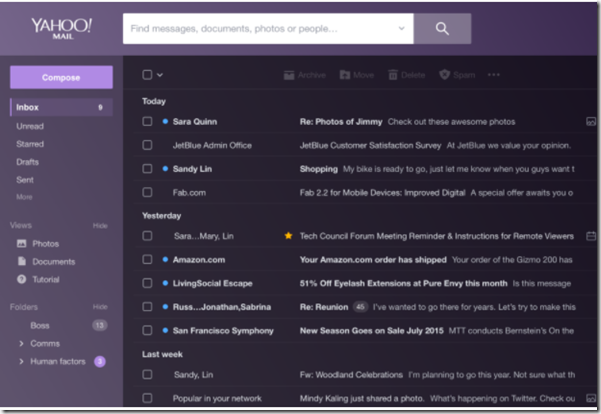 The third major change is the introduction of Yahoo Mail Pro, an ad-free version of Yahoo Mail that includes customer support. This is an upgrade to Ad Free Mail, introduced a few years ago as an annual subscription.

Yahoo Mail Pro discounts the ad-free product by $15 for annual subscribers to $34.99 per year, and introduces a monthly option of $3.49/month. You can also choose to subscribe to a mobile-only version of the product for $0.99/mo or $9.99/yr, which delivers ad-free service on Yahoo’s Mail Apps for iOS or Android.

All subscriptions include priority support for desktop and mobile as well.

Yahoo Mail Pro is available on desktop and mobile (via in-app purchase) for all U.S., English-language users today, and will reach other markets soon. The redesigned desktop app is also available today globally, in English, with other languages to follow.