Yes, it’s that time again — password changing time. On Thursday, Twitter revealed that a bug caused the platform to store user passwords in unmasked form. Normally, sensitive personal data like passwords would be stored in hashed form using a mix of letters and numbers to protect the content of the password itself. In this instance, it sounds like Twitter stored plain text passwords openly without any hashing on an internal log. 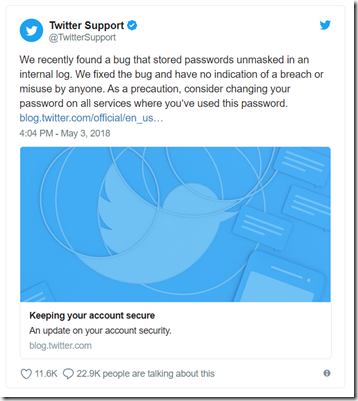 Twitter notes that it currently has “no reason to believe password information ever left Twitter’s system” or that these unprotected passwords were accessed by hackers, but the risk of the unknown remains. The company has advised users to change their passwords as a precautionary measure.

We mask passwords through a process called hashing using a function known as bcrypt, which replaces the actual password with a random set of numbers and letters that are stored in Twitter’s system. This allows our systems to validate your account credentials without revealing your password. This is an industry standard.

Due to a bug, passwords were written to an internal log before completing the hashing process. We found this error ourselves, removed the passwords, and are implementing plans to prevent this bug from happening again.

We’ve reached out to Twitter for more details on the bug and additional information about how this could have happened. Update: Twitter declined to provide additional technical details on the incident but emphasized that is believes the likelihood that the passwords were discoverable is “extremely low” and an internal investigation has revealed no indications of a breach or other misuse.

It’s pretty unusual for a company of this size to make such a basic security mistake, but that’s just another reason for users to take password protection into their own hands. Now is the perfect time to start using two-factor authentication and a password manager like LastPass or 1Password to keep your account credentials safe even when the platforms you use fail to do so.