5 things you need to know about mobile malware 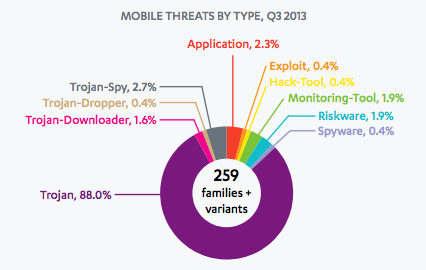 The latest Mobile Threat Report from the F-Secure Labs is now available.

You can download it now and watch our Mikko Hypponen and Sean Sullivan walk you through it above.

Or if you’re just looking for what you as smartphone or tablet owner needs to know now, here’s a quick list:

1. Android is the main target.
259 new mobile threat families and variants of existing families were discovered by F-Secure Labs in the third quarter of 2013. 252 of these were Android and 7 Symbian. That’s up just about 30% from the second quarter of this year. Android threats are growing in complexity with one in five the Labs finds being identified as a bot.

2. Windows Phone and iOS are basically malware free.
As a result of the strong vetting policies for their app stores, neither Windows Phone has any sort of malware problem, though there were reports of spy apps for both platforms this quarter. That doesn’t mean that it is impossible to be hit by online criminals on your phone. Phishing scams can be newly effective on smaller screen, which is why we’ve developed Safe Browser for Windows Phone and iOS.

3. If you stick to the official app stores, you’ll be in pretty good shape.
The vast majority of mobile malware that comes through the F-Secure Labs comes from a third-party market. Our Mobile Security, of course, provides an extra layer of protection for your tablet or smartphone.

4. Google Play is getting better.
The mobile malware that has made its way into an official app store has almost all ended up in Google’s app store, now known as Play. Google’s security is getting better but the Labs are concerned about the privacy concerns from the overcollection of data.

5. Keep an eye on your data.
How can you tell if an app may be harvesting your data for nefarious means? Check the reviews, the reputation of the app maker and the permissions it asks for. Our new free Android app “F-Secure App Permissions” makes that last step easy.