A free, almost surefire way to check for malware in 9 steps

How to scan every running process on your system for malware in seconds, without installing antimalware software.

No single antimalware engine can keep up with all the malware out there. But how about 57 of ’em?

Here’s what you should do: Install an antimalware product that does a decent job, has a long history of stability and decent success, and doesn’t slow down your system (unless you don’t mind a little sluggishness). Then use Windows Sysinternals Process Explorer or Autoruns to test currently running executables against VirusTotal‘s 57 antivirus engines, which offers the best accuracy you can ever get (with a small percentage of false positives). 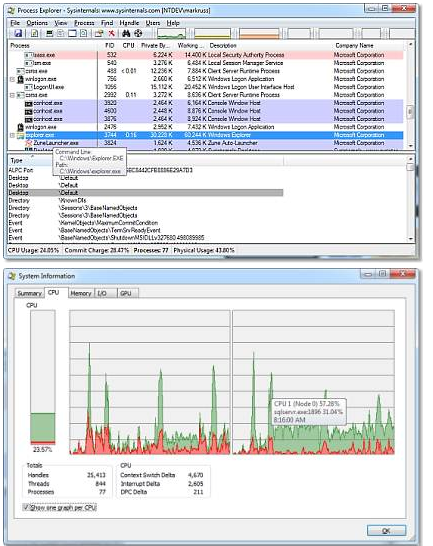 Step by step, do this now for all Windows computers:

If it says 1/57 or 2/57, however, it probably isn’t malware, but a false positive instead. On the other hand, I’ve seen at least one real malware program that was detected by only one of the engines, so double-check to see if the name and vendor who created the program looks familiar. If not, it could be malicious.

Most malware programs are caught at a ratio of 3/57 or higher. When I see anything at that ratio or higher, I right-click it in Process Explorer, note the file location path, and kill the process if I don’t absolutely recognize and trust the program file.

Then I manually delete the files associated with the executable — but proceed at your own risk! Be forewarned: You might accidentally delete something you need for some application or driver to run.

Occasionally, malware will “fight” with you and not let you kill the process. If so, repeat the process above, but go with Autoruns instead. Use Autoruns to unselect the program so that it won’t load at startup. Reboot and run Process Explorer again. Usually, the malware program will not be running and you can delete it.

Put a shortcut to Process Explorer on your desktop. I recommend that everyone download and run Process Explorer or Autoruns at least once a week. If that’s too much, at least be sure to run it if your computer exhibits suspicious behavior.

To be clear, even this detection method is not perfect. Certain malware can escape this sort of detection, although for now, it’s rare. Of course, in the future, malware writers could go out of their way to escape the clutches of Process Explorer or Autoruns. That’s not true yet, so the above method is one of the best protection methods you can use.

The best long-term advice to avoid infection in the first place will sound familiar if you read my blog regularly: Keep your software fully patched — especially Java, which you should uninstall if not needed — as well as any third-party browser products (I’m looking at you, Adobe). Most of all, don’t be fooled into installing something you shouldn’t. Finally, don’t share passwords between different sites — or use two-factor authentication — and you’ll become a top security defender. Those three pieces of advice trump any antimalware advice that you’ll ever get.

If your computer is connected to the Internet, no defense is perfect, and you owe it to yourself to apply the best detection regimen available. Feel free to pass my detection recipe along to every friend and co-worker. It’s hard to beat 57 antivirus programs for accuracy.