The hacker group Phantom Squad has recently claimed responsibility for an alleged attack that caused problems for Xbox Live users.

Earlier this month, Phantom Squad announced that they intended to take down Sony’s PlayStation Network and Microsoft’s Xbox Live gaming platforms for one week beginning on Christmas Day.

“We are going to shut down Xbox live and PSN this year on christmas. And we are going to keep them down for one week straight #DramaAlert,” read a tweet posted on Dec. 8 by an account allegedly operated by the hacking group (@PhantomSqaud). 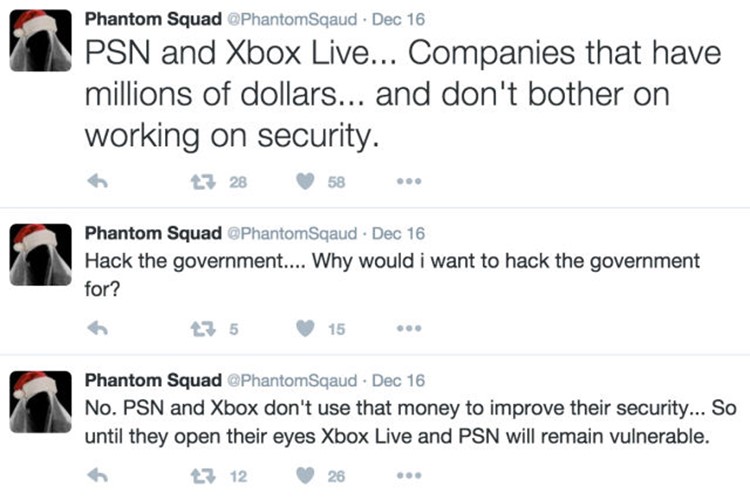 It would appear that Christmas has come early this year. Ars Technica reports that yesterday the group tweeted out “Xbox Live #Offline,” followed by “Maybe if you guys didn’t talk shit about us, we would not hit Xbox Live this early.”

Both of these tweets were allegedly accompanied by problems for Xbox Live users, as a statement posted on Microsoft’s support site following the attacks seemed to confirm:

“Hey Xbox members, are you having trouble purchasing or managing your subscriptions for Xbox Live? Are you also having an issue with signing into Xbox Live? We are aware of these issues and are working to get it fixed ASAP! Thank you for being patient while we work. We’ll post another update when more information becomes available.”

As of this writing, Xbox Live is running normally. Eurogamer.net writes that Phantom Squad has since claimed responsibility for this return of service.

“Lmao OF F***ING COURSE xbox live is back online we stopped the attacks,” the hacker group boasted on Twitter some three hours after it bragged about bringing down the platform.

Phantom Squad’s Twitter account was shortly thereafter suspended, and it currently remains unavailable. Before it was taken offline, however, Phantom Squad announced that PlayStation Network was next.

Shortly thereafter, the group announced the creation of Lizard Stresser, its DDoS-for-hire service. But the group’s celebration was shoft-lived. By New Year’s Eve, two of the hacker group’s members had been arrested, while a third was charged with some 50,700 counts of “cybercrime”-related offenses in July.