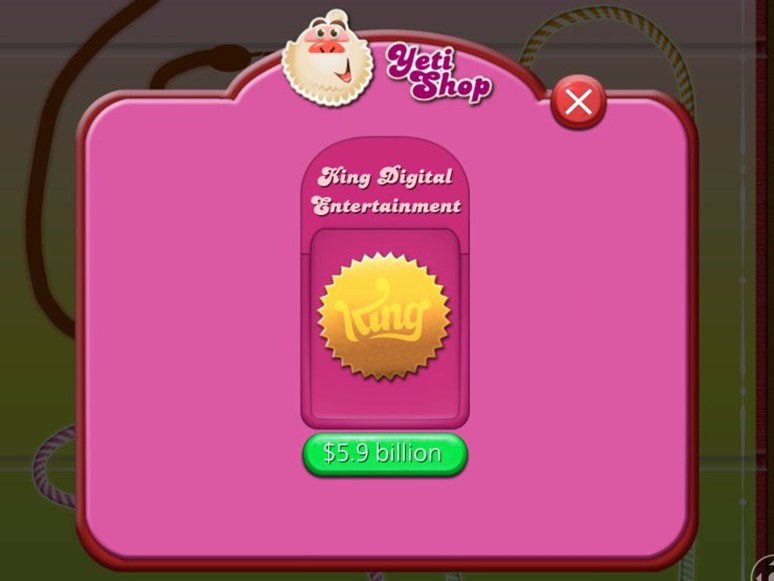 Well here’s a blockbuster acquisition for you. Gaming mothership Activision Blizzard has entered into an agreement to acquire King.com, maker of the wildly popular game Candy Crush and probably other games that I have nor ever will play. Mobile. Games. It’s all of the hot things.

Oh, and King says it had 474 million monthly active users in the third quarter this year. So there’s that. King went public in 2014.

Here’s what Activision had to say:

On November 2, 2015, Activision Blizzard, Inc. and King Digital Entertainment plc announced the signing of a definitive agreement under which ABS Partners C.V., a wholly owned subsidiary of Activision Blizzard, will acquire all of the outstanding shares of King for $18.00 in cash per share, for a total equity value of $5.9 billion.

Activision Blizzard CEO, Bobby Kotick, sold the acquisition to investors in a press release by saying:

The combined revenues and profits solidify our position as the largest, most profitable standalone company in interactive entertainment. With a combined global network of more than half a billion monthly active users, our potential to reach audiences around the world on the device of their choosing enables us to deliver great games to even bigger audiences than ever before.

We are excited to be entering into this Acquisition with Activision Blizzard. Since 2003, we have built one of the largest player networks on mobile and Facebook, with 474 million monthly active users in the third quarter 2015, and our talented team has created some of the most successful mobile game franchises. We believe that the Acquisition will position us very well for the next phase of our company’s evolution and will bring clear benefits to our players and employees.

Most players of Candy Crush will probably never know that the company who created it sold it. They’ll keep playing their games happily. Crushing Candy. I mean, that’s what you do in that game, right?

Anyways. Mobile eyeballs are the hot hot, especially in gaming.

Many jokes were made as the announcement hit Twitter. I’m not going to call this a good tweet, but it’s pretty indicative of what you’ll read for the next few days: